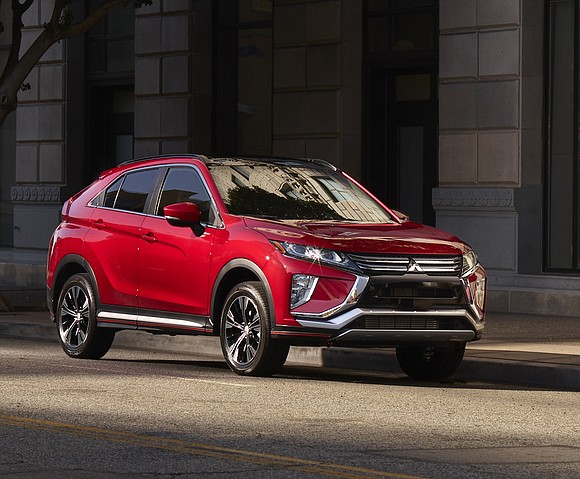 The 2019 Mitsubishi Eclipse is a no nonsense crossover designed to handle day-to-day driving needs. Its angular styling was eye catching. There was the three-bar grille and 18-inch alloy wheels.

It was powered by a 1.5-liter four-cylinder engine that made 152 horsepower and 184 pound-feet of torque. It was mated to a continuously variable transmission or CVT that was engineered to act like it had eight gears. It also had all-wheel-drive.

The Eclipse Cross had an EPA rating of 25 mpg in the city, 26 mpg on the highway and 25 mpg combined.

This was not a particularly fast or quick crossover. It was made for deliberate driving. At times the CVT would act as if it was shifting gears. However, as with most eight-speeds I felt first two gearshifts but not the rest. This transmission could also be shifted manually and it had paddle shifters as well.


On surface streets the Eclipse Cross was more than adequate. On the expressways I had to practice premeditated driving. Acceleration was lacking, thus, passing had to be planned.

Handling and sight lines were good. The suspension provided a firm ride. Of course the electric power steering was sensitive to driver input. This engine was a little loud under hard acceleration but it quieted down after it warmed up.

The interior was nicely done. Two analogue instruments in front of the driver, the odometer and speedometer, were separated by a TFT screen. My test vehicle had a heated steering wheel as well as heated front and rear seats.

The 2019 Eclipse Cross had all the connectivity you expect. There was Apple CarPlay, Android Auto, satellite radio, Bluetooth and a Mitsubishi Connect telematics system.

Back in the day, of all the Japanese automakers Mitsubishi was known to have the best engineering prowess. Some of that expertise was evident in the Eclipse Cross.

It had pushbutton start stop as well as lock and unlock. I thought the folding side view mirrors were surprising at this price point. Of course, there was a rearview camera – it’s the law – with rear cross traffic alert.

The head-up-display was on a screen that was camouflaged in the vehicle’s cowl atop the steering wheel. The projection was on the screen and not the windshield. A panel slid back and the screen came up. The same process was used to retract she screen when the ignition was turned off.

It was all a little elaborate and a little loud too because of the electric motor making all that stuff move. I also thought controlling the audio system could have been a little simpler. To change the station took some doing and took my eye of the road; that’s a never a good thing.

I had the SEL trim package, which is the top of the line. It had LED headlights, daytime running lights and automatic high beams. Blind spot warning with lane change assist, adaptive cruise control, forward collision mitigation and lane departure warning were among the driver safety aids.