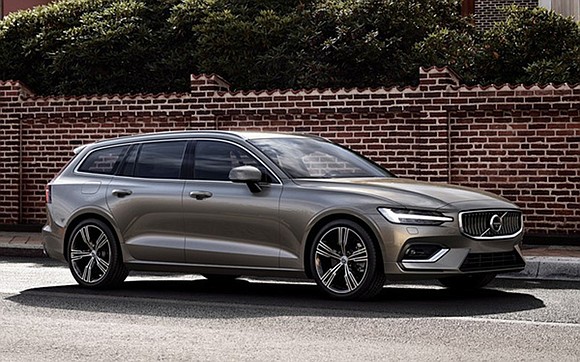 DETROIT – Volvo has come to market with a bunch of products during the last five years. But the 2019 Volvo V60 just might be the slickest and that’s saying something since it is a station wagon.

Volvo has gained plaudits for sticking to the station wagon market long after they fell out of favor with the car buying public. Their called Estates in Europe and the Swedish automaker has had at least one in its stable since 1953’s Volvo Duett. Now it has four, the V90 regular and Cross Country and the same for the V60. Of the group I like the V60.

Mirroring the body style of the midsize S60 sedan, the V60 was low, the sheet metal was swept back and it looked wider because of the low stance. It had the face of Volvo including the “Thor’s Hammer” LED headlight design and the new grille with Volvo’s Iron Mark badge. The name Volvo across the tailgate in block letters left no doubt as to the brand.

My test vehicle was a regular station wagon, not the V60 Cross Country which sits a little higher off the ground. Ground clearance for the “regular” V60 Estate was 5.4 inches. That got down to five inches with one person, me, in the car.

It was powered by Volvo’s 2.0-liter four-cylinder engine with a turbocharger and a supercharger. I still don’t think the automaker gets enough accolades for the merging of these blowers. In this iteration the T6 makes 316 horsepower and 295 pound-feet of torque at 2,200 rpm.

The engine was mated to an eight-speed automatic transmission. The combination meant power and efficiency. The Volvo V60 T6 got 21 mpg in the city, 31 mpg on the highway and 25 mpg combined.

This V60 T6 had all-wheel-drive and I found a good explanation on 4X4abc.com that explained just how the system worked. “The Volvo automatic AWD system has no traditional transfer case. Primary power goes to the front wheels. The rear drive shaft incorporates a viscous coupling (Haldex on the new XC-90) and as long as front and rear axles rotate at the same speed the coupling unit would remain inactive and the rear tires receive no torque - they are just rolling along. Would indeed slippage occur at the front wheels, the VC (Haldex) will create a power flow to the rear axle.” It can send up to half of the V60’s torque to the rear wheels.

However, “if only one axle is powered, front and rear axles do not rotate at the same speed. The powered axle always spins a little faster (about 5%) than the axle with the wheels just rolling along. It slips a little on the ground. So, the VC (now Haldex) reacts to the speed difference and compensates with a proportional allocation of torque for the rear. This way the rear axle will get 5% of the torque and thus each rear wheel receives 2.5%.”

That is why Volvo can say that all four wheels get power all of the time because they do.