A mixed bag of jazz greats, generations and genres made the 65th edition of the Newport Jazz Festival one of the most interesting and exciting of recent memory. Jazz Legends such as Herbie Hancock, Dianne Reeves and Dee Dee Bridgewater mounted the Fort Stage followed by relative newcomers such as Kamashi Washington. The festival concluded with Chicago's very own Oscar and Grammy awards winning superstar Common. The sheer depth and breadth of the event was staggering. The immense size of this year's crowd also reflected the growing popularity of the fest under the freshly minted stewardship of artistic director Christian McBride with founding father George Wein giving his benevolent blessing from the sidelines as he cruised the perimeter of the sprawling stage venues of Fort Mason in his omnipresent 'Wein Mobile.' The festival bestowed upon him a surprise Lifetime Achievement Award in recognition of his leadership and vision over the past 65 years. 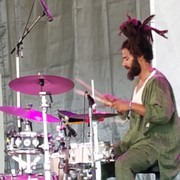 Opening Day brought an explosive set from Oscar and Grammy winning icon Herbie Hancock whose resume over his 60 plus year resume reads like an encyclopedia of the history of modern jazz. Name those he didnt play with and you'd have a short conversation indeed. Herbie has been playing jazz for nearly as long as the festival is old, yet his playing and composing show no signs of aging. 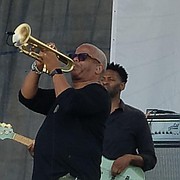 He brought with him a powerhouse group that in itself reflected some of the newer forces in jazz who are making their own marks on the future of the genre. As he romped through a compendium of his hits , many of them marking landmarks in the changing direction of music, particularly on the electric keyboard and synthesizers, it was his explosive playing on the acoustic piano that showed Herbie at his best. His visceral approach on the Steinway proved him to be the most accomplished pianist living and playing today on the concert stage be they jazz, classical or any other genre. 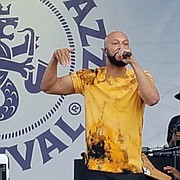 In fact, this year's festival seemed to be a celebration of jazz piano greats. From the Opening Night performance of TV'S Jon Baptiste at the International Tennis Hall of Fame to the Tribute to Errol Garner which got things moving on the Fort Mason Stage Sunday morning with Christian Sands, Helen Sung and Tadataka Unno, the fest was heavy on piano legends old and new. Festival Founder George Wein brought the Newport All Stars out for a special free pre festival twilight concert with the impresario himself tickling the ivories. Aaron Diehl, whose credits include collaborations with Wynton Marsalis and breakout classical composer Philip Glass and and his work as long time music director and arranger for multiple Grammy winning vocalist and Newport Jazz Festival favorite Cecile McClorin Salvant, was featured solo in a lunchtime recital Sunday afternoon and later in the day on the Quad Stage with his musical soulmate Cecile Mclorin Salvant.

If you missed the 2019 Newport Jazz Festival you missed one of the defining musical events of the decade as it draws to a close.