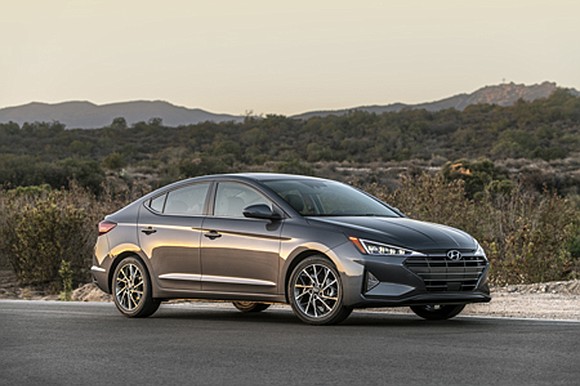 The Hyundai Elantra Sport was a great car.

Never mind its 1.6-liter turbocharged four-cylinder engine that made 201 horsepower and 195 pound-feet of torque.

Never mind that it had a smooth shifting six-speed manual transmission.

And never mind it had one of the funkiest sets of 18-inch alloy wheels that we’ve seen in a while.

What made the compact sedan great was that its USB jack worked without the engine running. In other words, just plug in your smartphone and it will start charging without turning on the ignition. That makes a big difference when the power is out and stays out for three days.

The car had LED daytime running lights as well as full LED headlights and there was a moon-roof too.

We had the Elantra Sport. The car was smooth, the gear-shift had just enough torque to give a sense of being attached to the car, but it was not like we had to wrestle. It was an easy driving car.

The 2019 Hyundai Elantra cornered well, it rode well and because of the manual transmission, it had some spunk.

We climbed inside and found a sporty interior that was all black with red stitching. The perforated seats were not power but the front set was heated. They had fixed bladders for the thighs and the sides, which made the seats very comfortable.

The sportiness of the 2019 Hyundai Elantra Sport went right down to the floor with the aluminum and rubber studded peddles and foot-stop.

A three-dial climate control system dominated even though there was a touch infotainment screen atop the dash. From that screen Apple CarPlay and Android Auto could be engaged and controlled.

The flat bottom steering wheel was wrapped, stitched and sporty. It had a really nice feel. There were power windows but only the driver’s was completely automatic.

The instruments were black with white numbers and lettering reversed out. They odometer and speedometer each were large circles and each had two small circular gauges within. The odometer held the temperature gauge while the speedometer had the fuel gauge.

There was a TFT screen between the odometer and the speedometer with the user settings and the readout of the lane departure assist system.

That was just one of the equipment surprises. This car had blind side alert, push button lock and unlock and push button start stop.

Legroom and headroom were outstanding there is no other way to say it. There was plenty of each which was surprising in a compact four door sedan. With front-wheel-drive, the rear floor in the back was practically flat. We do believe that three grown people though crowded, could sit in the back seat. There was a sizable trunk and the back seats folded creating even more storage space.

However, we did bump our head getting out of the 2019 Hyundai Elantra. Those rear doors are not as tall as the headliner. But a little scrunch to get in the back seats in exchange for the amount room that was there was well worth the effort.