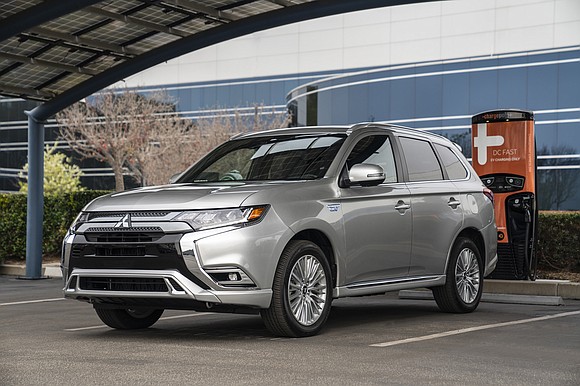 The Mitsubishi Outlander PHEV has been the best-selling plug-in hybrid CUV in the world for the last two years. And it seems to have done so without a lot of fanfare in this country.

Still, if gas mileage and contributing to clean air are a couple of items you’d like to contribute to the environment, then the Outlander PHEV might be right up your alley.

This powertrain was mated to a no gearshift transmission. That’s when Mitsubishi called it. We saw one drive somewhere else. That may be what they call it, but it sounded like a continuously variable transmission to us. Technically, they don’t shift gears but like some other automakers, our test vehicle had paddle shifters. Go figure. It also had a lithium-ion battery.

Our test vehicle had S-AWC. It means super all wheel control. The gasoline engine drives the front wheels. The axle has a built-in clutch that switches the Outlander for engine powered driving at high speeds. PHEV to parallel drive mode. The series hybrid mode is engaged when the battery pack is low or when we needed additional power, the two electric motors were powered by the battery pack and the gasoline powered generator.

That is the mode our test vehicle stayed in most of the time. Mitsubishi said the gasoline powered engine/generator, while operating at enough speed, will feed excess electricity back into the lithium-ion battery pack.

All this technology lets the 2020 Mitsubishi Outlander PHEV GT S-AWC that we tested drive in electric only mode for up to 22 miles. It got 74 MPGe or 25 mpg combined in gasoline only mode.

Then there is the charging. The Outlander PHEV can be charged with a 120-volt standard outlet in eight hours. Using a 240-volt line, it can be charged in four-hours. And get a DC Fast Charger and it will charge 80 percent of the battery in 25 minutes.

The vehicle is a technological wonder and it drives well too. When the battery is charged acceleration is exceptional – for a hybrid. There were three drive modes: normal, electric and it can be locked in four-wheel-drive.

The gear shifter was electronic. Nothing wrong with that but the park button was in front of the shifter. In other words, it was not easy to reach. And that to us is a no, no. Don’t make any facet of a vehicle difficult for the driver to operate.

The interior of our tester was black. The seating surfaces were quilted leather. The polymer trim was made to look like carbon fiber that was stained dark brown with black intermixed. It really looked nice. We just wished they had carried the theme through to the back-seat area. The polymer on the door handles was black. Not that anyone would notice but we did.

Still, there was plenty of head and hip room in the back seat. Legroom was acceptable too. There was a moonroof and a good bit of cargo space with the backseats deployed.

This Outlander had two 110-volt outlets. One was in the second row and the other was in the cargo area. And of course, it had a USB jack in the front in the area beneath the touch infotainment screen and there was another one in the back.

There were also the usual culprits, voice control, satellite radio, Apple CarPlay and Android Auto, push lock and unlock as well as push button start and power front seats. And there was LED lighting all round.