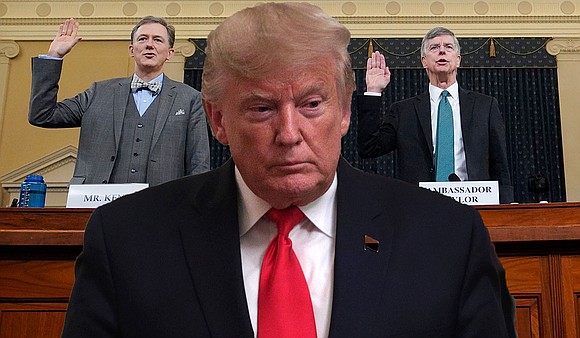 When you elect a clown, expect a circus, and this month's impeachment hearings have been precisely that. Yelling, shouting, and disrespectful accusing seem more the rule than the exception. The increased volume of Mr. Trump's tweets echoes his fear and discomfort because he has been called out. Republican histrionics and obsession with "process" suggest that Mr. Trump's party is not especially interested in facts. Even the falsehood that Democrats have been "out to get" this President since he was elected is outright wrong. House Speaker Nancy Pelosi came to the impeachment conclusion only reluctantly. And Democrats have been very measured in their accusations. While Mr. Trump has only been charged with two "high crimes and misdemeanors," if Democrats wanted to throw the book at the Criminal-in-Chief, they could have detailed multiple "high crimes and misdemeanors." Instead, they've kept it narrowly focused on Mr. Trump's behavior regarding Ukraine. Democrats have shown admirable restraint, while Republican shouting and deflecting could be the basis of a comedy show if the matter weren't so serious.

And every time some of these folks speak, they illustrate their hypocrisy. Thus, Florida Congressman Matt Goetz launched into a tirade about Hunter Biden's very candid disclosure of his substance abuse challenges, some of which are detailed in a New Yorker article this summer (https://www.newyorker.com/magazine/2019/07/08/will-hunter-biden-jeopardize-his-fathers-campaign). But Georgia Congressman Hank Johnson had no time for Goetz, saying that Goetz's attack on Biden was like "the pot calling the kettle black). Goetz was charged with a DUI some years ago. The charges were mysteriously dropped, but there is evidence that Goetz was impaired.

Meanwhile, Hunter Biden has never been arrested or charged with any of his substance abuse challenges. Goetz's attack on Hunter Biden is not the only example of Republican hypocrisy and improper behavior. These impeachment hearings show how far Republicans will go to obfuscate Mr. Trump's behavior and to throw mud at Democrats.

While Republicans are throwing mud at Hunter Biden, no one has asked for any investigation of the Trump family. Ivanka has used her father's influence to gain coveted trademarks in China. Her brothers have used government resources and their father's influence to feather their nest in establishing new Trump properties all over the world. While I'm not condoning Hunter Biden's possible pecuniary use of his father's status, none of us should be happy about the way our government has subsidized the Trump Empire.

In another example, Melania Trump got outraged and agitated because one of the Democratic legal witnesses, Stanford Law Professor Pamela Karlan, made an inappropriate joke about her son, Barron Trump. The professor said that while Trump could name his son Barron, he could not make him a baron, an attack on the autocratic power that Mr. Trump attempts to wield. One might have thought that the professor had attacked the child or ridiculed him. She didn't. She made a clumsy joke and was so roundly criticized for it. And she apologized. Melania "Be Best" Trump played mama bear for her teenaged son. Yet, she seemed to have no words for another teen, Greta Thunberg, who was Time Magazine's Person of the Year. Thunberg, who describes herself as "on the autism spectrum" with Asperger’s syndrome, was lifted because of her advocacy for the planet. Time says the young lady won the award "for sounding the alarm about humanity's predatory relationship with the only home we have, for bringing to a fragmented world a voice that transcends backgrounds and borders, for showing us all what it might look like when a new generation leads." But Mr. Trump doesn't believe in global warming or climate change, so he ridiculed the young woman in one of his many rude and bullying tweets. And Melania thinks that only her son should be protected from bullying. The pot and the kettle. If she wants to call bullies out, she might start with her husband.

There have been accusations, finger-pointing, anger, and deflection during these impeachment hearings. Republicans have shown that they have taken an oath, not to protect the Constitution, but to protect Mr. Trump. As Republicans march lockstep behind a corrupt President, Congressman Hank Johnson has it right. The “pot really can't call the kettle black."