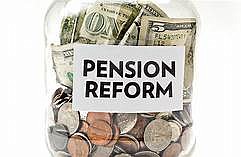 “Our state’s broken pension system has been a heavy weight on the backs of Illinois taxpayers,” said Batinick. “With this bill signed into law I can proudly say that we are providing relief to our hardworking residents. This was a significant bipartisan reform effort that will make positive change. The work is not done on pensions, but today we can all celebrate this success.”

Over the next five years, this pension consolidation is expected to produce an additional $820 million to $2.5 billion in investment returns alone, which could mean lower contributions funded by property taxes.