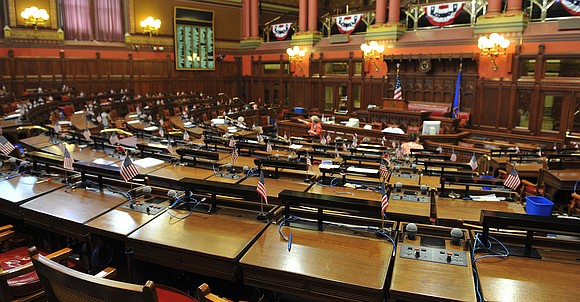 The changing of House leadership will mark the first time Trump will sit at a clear disadvantage as he continues to try and build a wall on the southern border and push through other parts of his divisive policy. House Chamber – U.S. House of Representatives (Photo: iStockphoto / NNPA)

According to several new reports, the House will vote Thursday on a funding bill to re-open the government and end the partial government shutdown.

January 3 is when the new Democratic majority in the House will be sworn in.

It’s also when President Donald Trump will begin facing what outlets like CNN said will be an intensified level of scrutiny in the new year because Democratic House committee chairs, led by prominent members of the Congressional Black Caucus, are poised to “comb through every corner of his administration, subpoena his Cabinet and investigate” Trump’s personal finances, associates and business interests.

The changing of House leadership will mark the first time Trump will sit at a clear disadvantage as he continues to try and build a wall on the southern border and push through other parts of his divisive policy.

“Democrats should not give an inch,” former Virginia Gov. Terry McAuliffe said.

NPR noted that this week’s legislation to end the shutdown will include the full-year appropriations for six of the seven outstanding funding bills and stop-gap funding until Feb. 8 for the Department of Homeland Security, which is where the fight over Trump’s demand for $5.7 billion in border wall funding is contained.

House Speaker-designate Nancy Pelosi has previously stated that the House would take up a bill to reopen government as a first order of business.

Senate Majority Leader Mitch McConnell, R-Ky., has said he will only put a bill on the floor if President Trump will support and sign it, NPR reported.

The Senate previously passed a bill to keep the government open without the president’s wall funding, before Trump changed his mind and decided not to sign it, according to NPR.

The outgoing Republican House majority passed a bill with Trump’s wall funds that was not passed by the Senate, where Democratic votes are necessary for such legislation. Now, that Democrats are taking over as House majority, Trump’s battles are about to worsen.

CNN broke down the five Democratic Chairs who figure to send Trump into more of his infamous tweet storms. Among them is Waters, who has spoken outwardly of impeaching the 45th president.

Now she’ll run the Financial Services Committee, which will give her an avenue to probe the finances of Trump and the Trump Organization.

Waters has lashed out at Trump over his controversial immigration policy which led to the separation of families at the border, including infants being taken away from their mothers.

She’s also pressed for an investigation into Deutsche Bank, a lender to Trump that was separately implicated in a Russian money laundering operation in 2017 and Waters has pushed the Treasury Department to divulge financial ties between Russia and the Trump family.

The jurisdiction of Waters’ committee makes it likely she’ll clash with Trump in a way that particularly hits home for him: his finances, according to CNN.