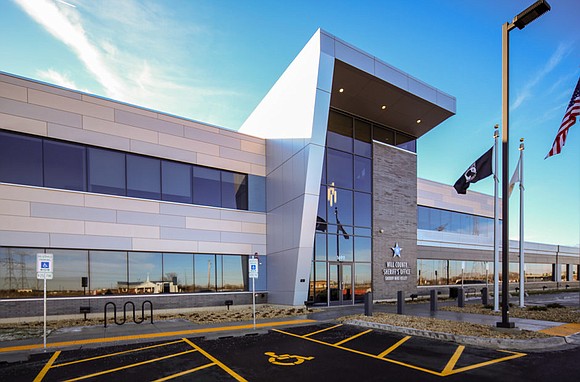 Joliet - The Will County Public Safety Complex this week was named as the “Project of the Year” for 2018 by the American Public Works Association Southwest branch. The 85,000 square foot facility received the award for the $25-$75 million structure category during a ceremony held at the Patrick Haley Mansion in Joliet on Wednesday January 9th.

“We are extremely gratified and humbled by this prestigious award for our new Public Safety Complex,” said Denise Winfrey, Speaker of the Will County Board. “From design conception and first spade in the ground until completion late last year, every detail of our new Sheriff’s Office, 911 Dispatch Center and Emergency Telephone System Board (ETSB) was given meticulous attention and today that hard work paid off with this award.”

The new facility features state-of-the-art-law enforcement security and technology as well as an energy efficient operation which has previously been recognized with an award from Com Ed. The building also achieves the state mandated goal of consolidating ETSB systems from 31 different communities in the area.

“Will County’s new Public Safety Facility is a home run on multiple fronts,” said Herb Brooks (D-Joliet), Chairman of the Capital Improvements Committee which oversaw construction of the new building. “Our Sheriff has the best tools available in law enforcement to protect our citizens and our county has top flight communications to ensure better safety of the public.”

Winfrey thanked local trade unions and the project architect, WightCo and added that the County Executive and entire county board deserved credit for making the project possible.

“This $29.5 million project was born of much hard work and tenacity by all of the Will County Board,” said Capital Improvements Committee member and former committee Chair Ray Tuminello (R-New Lenox). “From design to completion, the project took several years with much hard work from every member of the county board. Indeed, we came in ahead of schedule and under budget and that’s always good for taxpayers.”

The Will County Public Safety Complex now moves to the next level of competition for further consideration.

The facility is located at Laraway Rd and Route 52 in Joliet.