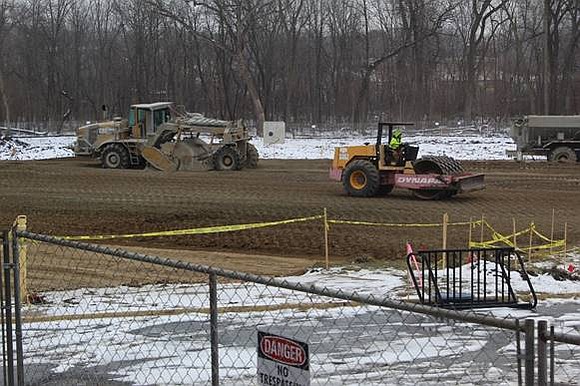 Construction workers prepare grounds within the footprint of the new Will County Health Department Building.

After operating in the same nearly 100-year-old building since its creation in the mid-1940s, the Will County Health Department (WCHD) will hold the official groundbreaking ceremony for their brand new building at 1 p.m. Tuesday, Feb. 5.

The new building will be on the same campus as the current building, just south of the I-80 - Richards interchange off of Neal Avenue (Neal runs parallel to Richards). The new WCHD building will continue to be between Will County's Sunny Hill Nursing Home and the Health Department's Community Health Center building. WCHD's Environmental Health, Behavioral Health, Family Health Services (including the WIC program), and Administration divisions will all be housed in the new building. In addition, the Will County TB Clinic, currently next to the old building, will also be part of the new structure.

"We've done our best all these years to accommodate all of our programs," said WCHD Executive Director Sue Olenek. "But we will now have a state of the art, purpose-built building designed specifically for the Health Department. It will be easy to navigate, allowing our clients to quickly find the programs they are looking for."

The Will County Health Department was first established during the population explosion that came from new residents working at the old Joliet Arsenal during World War II. Health Department staff took residence at a former TB Sanatorium, which is the reason the old building has wings, where the patient rooms used to be.

The program for the ground breaking ceremony will actually take place indoors, in the current building's lower level Community Room. Scheduled guest speakers include County Executive Larry Walsh, Joliet Mayor Bob O'Dekirk, Will County Board Speaker and Board of Health member Denise Winfrey, Executive Director Sue Olenek, and Board of Health President James Zelko. Refreshments will be served indoors, before the ceremony moves outside for ground moving photos.

Due to the current parking situation on the WCHD campus because of construction, those wishing to attend are encouraged to carpool. Upon arrival at the WCHD campus, follow posted signs.