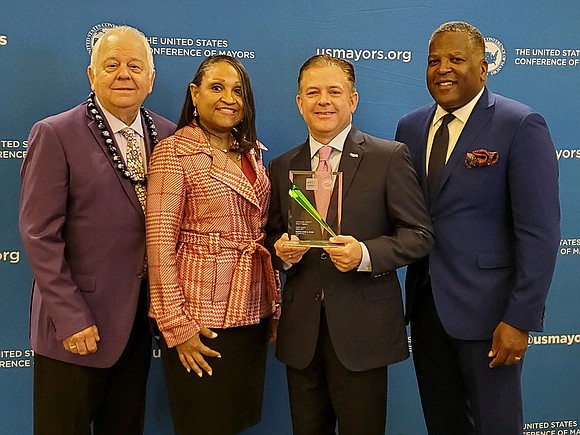 Mayor John Noak accepted the CommunityWINS® top award in the small city category for economic development initiatives from the U.S. Conference of Mayors and Wells Fargo recently. In addition to Mayor Noak’s recognition a $75,000 grant was awarded to Lewis University in support of its Lewis Innovation Hub. An independent panel of judges selected recipients of the Wells Fargo Foundation-funded grants from 136 applicants representing small, medium, large and metropolitan cities. “We appreciate Wells Fargo and the Wells Fargo Foundation for their continued support of the CommunityWINS® Program, which also celebrates the leadership of mayors and city governments,” said Tom Cochran, CEO and executive director of the U.S. Conference of Mayors.

The CommunityWINS® Grant Program, launched in 2015, recognizes nonprofits and cities that drive neighborhood stabilization, economic development and job creation. Mayor Noak was recognized for his efforts in the Lewis Innovation Hub partnership. The Innovation Hub is a business incubator program in Romeoville that helps small businesses learn and grow into sustainable companies. Entrepreneurs who join the Innovation Hub receive coaching, access to the Lewis database, lab time, networking opportunities, enrollment in classes and seminars, and more. The Innovation Hub is also funded by the Des Plaines River Valley Enterprise Zone, which includes Joliet, Lockport, Romeoville, Rockdale and Will County.

“We are thankful for our partners that have made the Innovation Hub possible, especially Lewis University and the Enterprise Zone Board,” said Romeoville Mayor John Noak. “The fact that an outside organization felt it was worthy of this recognition reinforces the fact that we have something special happening at the Lewis Innovation Hub.”

Romeoville continues to explore opportunities to partner business and education. The incubator program is a huge step towards that goal. Additional information on the Lewis Innovation Hub, including an application to join or how to be a mentor, can be found at lewisu.edu/innovate.