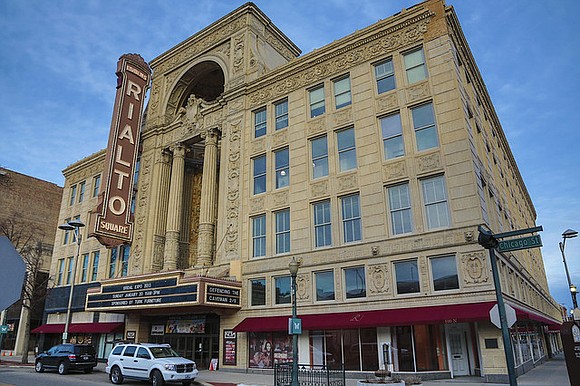 The city of Joliet is closer to securing a Tax Increment Finance (TIF) district development agreement for the Two Rialto Square property. Located at 110-116 N. Chicago St., the building and commercial space used to serve as home of the art gallery Gallery 7. At Tuesday’s meeting of the Joliet Economic Development Committee, officials reviewed a potential TIF district development agreement for the Two Rialto Square property. Economic Development Director Steve Jones said the only property tax being generated within that building stemmed from a few leases to law firms, which have since vacated their tenant spaces. “We’re told that, based upon the fact that those folks have left, the building is going to be a zero equalized assessed value building, which means that every nickel of property tax generated, as you know, is going to go directly to the TIF District,” he said.

Last year, the Will County Metropolitan Exposition Authority conducted a bid process to sell the vacant property. The new owner, John Bays, is requesting a TIF district development agreement to cover redevelopments costs related to improving the building. A deal could help lay the groundwork for a renovated office building with six-story structure and a new restaurant lounge. “We start collecting money that’s going to go into the public pot for things, like the plaza development, Chicago Street [reopening, and] other streetscape items downtown that we just don’t have the money to do,” Jones said. “This is the new trend, and you’ll see other development agreements next month … which will also be less than 100 percent as well.”

The project aligns with the goals of the city’s TIF district and downtown development plan, officials said. Bays is looking to substantially complete renovations for the Two Rialto Square property no later than August 2020. Some improvements have already been made to the building. The owner is eying $5.3 million costs for the Two Rialto Square property. Bays said that getting a restaurant attached to the project still needs to be ironed out. “I’m going to make it happen one way or another,” Bays said.

If full occupancy does not occur with 12 months of completion, the owner intends to convert the fourth through sixth floors to a hotel or apartments for an added cost of $1.3 million. Councilman Larry Hug commended Bays for having a Plan “B” in the event the project hits a snag. Past development agreements incentivized private developers with 100 percent of the incremental tax revenues generated. The same would not hold true, if this deal is approved by the city council. This time, the city is looking to retain $45,000 of incremental property taxes per year, with the remaining rebated over 22 years. Bays is the owner of several buildings in the city and its downtown area. Bays said his interest in the city is simple. “This is just important to me,” he said. “I love this town. I want to fix up downtown. It isn’t about the money anymore. It’s just I want to be part of making the place successful.” Architectural renderings have not been submitted to the city. In a 3-0 decision, the committee provided a positive recommendation to the city council. Officials will consider approving the development agreement at a July 16 meeting.