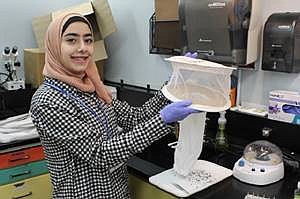 This extremely wet spring has already led to an unavoidable very bad season for mosquitos. And once again, the WCHD (Will County Health Department) Environmental Health Division has 14 traps in various locations for the purpose of tracking possible West Nile Virus activity among culex mosquitos.

WCHD Environmental Health Director Tom Casey, however, says the biggest problem right now is just a load of nuisance floodwater mosquitos eager to bite. "If you take a walk right now, you can see the puddles of algaefied water from all the rain. Both the floodwater and culex mosquitos (which transport West Nile Virus from infected birds to humans) have plenty of places to lay eggs right now. The big problem with culex mosquitos will actually come when the weather becomes hot and dry."

Two of 14 Will County mosquito traps for tracking West Nile Virus activity are located near the Health Department. Those hot and dry days, says WCHD Sanitarian Kyle Moy, are when it becomes more crucial than ever to eliminate standing water around our homes. "People need to get in the habit right now of cleaning out their gutters and rain barrels, changing the water in their birdbaths and kiddie pools, and getting rid of old tires and garbage, or even empty soda cans that collect standing water. When the wetness from the rain dries up, the culex mosquitos especially will look for sources like that to keep laying their eggs."

Moy's team, which includes three interns every summer, is responsible for collecting mosquito samples from the 14 different traps, usually twice per week, and seeing if there is any trace of West Nile Virus activity. So far this year, one sample collected from a Plainfield trap did turn out positive. Positive samples have been found in DuPage and Cook County as well. Thus far there have been no human cases reported in Illinois. Last year, there were four human cases in Will County and 176 statewide.

The WCHD Environmental Health Division also collects birds to send to a state lab to test for WNV activity, and the public is asked for their help. "If you have an intact, recently deceased bird on your property please call our hotline at 815-740-7631. We will collect it if it's able to be tested," said Casey.

The Environmental Health Division participates in a mosquito larvicide program with about a dozen Will County municipalities (Joliet has their own program), including the county highway division. Casey says he expects very little hesitation this year when it comes to using the larvicide. "Just about everyone who works with us begins before there are signs of trouble. One of the worst spots is the catch basins at the bottom of street storm sewer drains. The catch basin is below the draining point, so water collects there, and mosquitos thrive in that environment."

But beyond municipalities using larvicide, the key to holding back both the general nuisance of mosquito bites and the risk of WNV is very much in the hands of the people. Will County residents are encouraged, as always, to wear long sleeves, long pants, socks, and shoes, all light in color, during the peak mosquito period of between dusk and dawn. (Dark clothing attracts mosquitos because it is similar to their dark environments.) It is also important to wear mosquito repellent containing DEET.

And as Moy points out, there is one thing he has seen residents try that is definitely not recommended. "We are asked about this a lot, and the answer is that keeping a bat house on your property is not a good idea. For one thing, you have the rabies risk when bats are around. But also, even though they are known to eat mosquitos, that is not what bats like best. They are more interested in eating moths or larger bugs. So we certainly do not recommend having an open bat house thinking that the bats will simply fly around and rid your yard of mosquitos."

West Nile Virus has symptoms very similar to the flu (such as fever, headache, body aches, and swollen lymph nodes). Anyone can catch WNV, but those most at risk for it are seniors, young children, and those with a weakened immunization system.