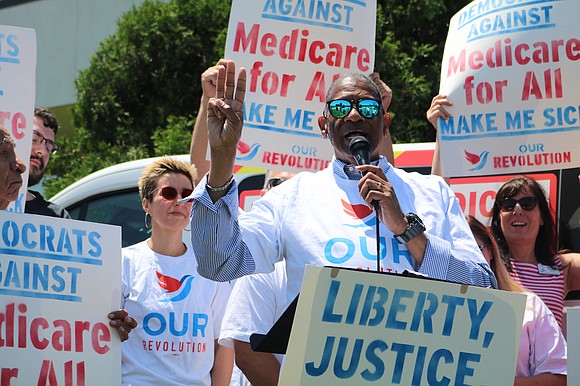 Supporters of “Medicare for All,” a proposal that aims to set up a single-payer health insurance, made a pitch to U.S. Rep. Bill Foster, D-Naperville, outside his Joliet office.

The demonstration was organized by the Will County Progressives and Our Revolution Illinois Chicago, two organizations that aim to propel the movement inspired by Congressman Bernie Sanders and his 2016 presidential campaign.

Foster has not signed on to legislation in support of “Medicare for All.”

“We have an emergency in our country, and that emergency is this: there are politicians who refuse to use their power to fight for the right of human beings to have health care,” said Joseph Geevarghese, the national director for Our Revolution.

Richard Rodriguez, a representative for Our Revolution Illinois Chicago, said he would like the nation to join “every other major country on this Earth, guaranteeing health care for all people as a right and not as a privilege.”

Demonstrators hoisted signs in the air to make their views known.

The rally drew some support from motorists honking their horns as they passed the demonstration.

Will County Board Member Rachel Ventura said fighting for the cause hits close to home.

In 2016, she left what she described as a turbulent marriage.

“During that time before I left my marriage, I had military insurance—the only universal health care we have in this country working for millions of Americans,” she said. “My children were covered—and through the divorce, now they are still covered—but during that time, I did not have insurance and it made it very difficult for me to leave my marriage.”

Ventura said she is committed to fighting for the cause.

“I’m here to fight for every door I knocked on,” she said, referring to her 2018 campaign for Will County Board. “We knocked on 10,000 doors in my district to make sure that people were represented.”

Herbert Brooks Jr., a Will County Board member and a senior pastor at St. John Missionary Baptist Church, Joliet said that as a pastor, he hears a lot of horror stories about the health care system.

“People come to me in my office talking about, ‘I don’t want to go to the hospital and they don’t want to go to the doctor, but they’re very, very ill, because they know the bills they will receive and they cannot afford it,” he said. “It hurts my heart to see people that are sick, laying in their beds at home, and will not call an ambulance or go get help, because it’ll add to the bills that are already piled up.”

Geevarghese said Foster’s congressional office has reached out to the demonstration’s organizers.

“We will be meeting with him shortly after this,” he said.

Organizers for the demonstration encourage people to join the movement, and those interested are urged to Text “M4A” to 83224 to get involved.