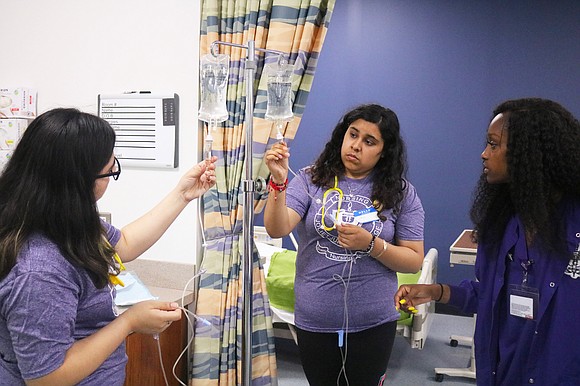 Both events took place June 11 to provide an opportunity for students to get a close look at two career pathways that are high demand in today’s world.

More than 50 students registered for the nursing Exploration Day and 18 for fire science/EMS.

During the event, those interested in the nursing program toured the nursing department, participated in a hand hygiene class, enjoyed having lunch with current Joliet Junior College nursing students and more.

Jorie Kulczak, a professor for Joliet Junior College’s nursing program, said the event provides a good snapshot of what it’s like to be part of the nursing program.

“We’re teaching them some of the skills we actually teach our nursing students,” she said.

About 250 people apply for admission into the nursing program annually.

Kulczak said one of the most common reasons people do not gain admission to the program is timing.

“They might apply too soon,” she said. “Maybe they haven’t had enough of the general education classes to be successful on our TEAS (Test of Essential Academic Skills) entrance exam, which is the exam they have to take to qualify in order to get into the program. Sometimes students take that too soon, so they don’t get the score that they need. They meet with a nursing advisor, and we encourage them to take a couple of their general education class. They can retake the test and qualify to get in at that point.”

Much like physicians, there is a growing need for nurses of color in the health care field to serve patients of diverse backgrounds.

Kulczak said Joliet Junior College is doing its part to support the needs of the diverse populations.

“We’re very lucky to have a much higher percentage of diversity compared to the nursing profession in general,” she said. “Almost 40 percent of our students are diverse coming from different cultural backgrounds. We teach cultural diversity with every disease process that they learn. We teach about health disparities that happen from culture to culture. They have to take a cultural diversity class in order to graduate from our program.”

During the event, those interested in fire science/EMS took part in team building, completed an obstacle course, tried their hand at CPR and more.

Charlotte Garrebrandt, the coordinator for Joliet Junior College’s EMS program, said that showcasing the program is hoped to drive interest among prospective students.

Typically, firefighters must learn to assume the role of paramedic and firefighter on scene.

Everyone interested in firefighter/paramedic field is required to pass physical agility testing.

Joliet Junior College fire science/EMS student Lora Neimann said another challenge to overcome when working in the field is stereotypes.

“I feel sometimes we, as girls, think that need to prove ourselves in the field, but as long as you have a good work ethic and you’re trying, I think most of them will accept you,” she said.

“If you prove yourself, you’re going to get the respect,” she said.