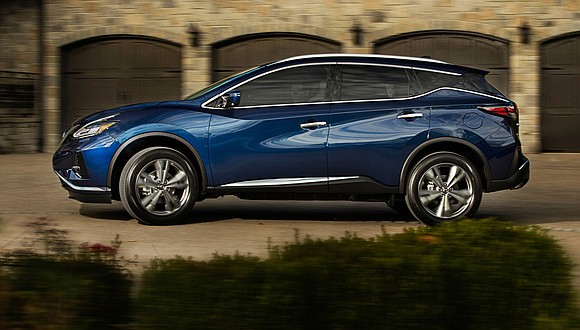 Nissan’s Murano was one of the earliest pure crossovers. It has been around for 16 years. But now in its third generation it has been extensively refreshed for the 2019 model year and it looks sleek, slick and svelte.

The V-motion grille was more pronounced. There were redesigned LED headlights and taillights, new LED fog lights and 20-inch aluminum alloy wheels. But I think were the big boost came was inside. That begins with what was under the hood.

The 2019 Murano was powered by a 3.5-liter V6 that made 260 horsepower and 240 pound-feet of torque. It was mated to what Nissan has branded an Xtronic CVT or continuously variable transmission. They’ve put a lot of work into this technology that many manufactures took a look at and walked away.

CVTs don’t have the gears, it is a pulley system. The point is there are fewer parts so they are easier and I presume cheaper to manufacture. The upside is that they get better gas mileage than regular transmissions but it is all downhill from there. They are loud under acceleration, they seem to be slow and since there are no gears they are disconcerting to drivers. A CVT can actually make it seem like there is something wrong with the vehicle.

Nissan through its engineering prowess has done away with most of the downsides of CVTs. This transmission was quiet, it transferred power to the wheels efficiently and it feigned gear shifts so well it left me wondering does the it or does it not have a CVT. It did and this one could be put in manual mode.

Anyway, the combination gave the 2019 Murano an EPA rating of 20 mpg in the city, 28 mpg on the highway and 23 mpg combined. The Murano was quick and relatively quiet under hard acceleration. And it did feel like gears were shifting rather than the drone that comes with most CVTs.

But the real surprise was the interior. It was quilted leather with stitching. The seats were comfortable; the front set was heated and cooled while the back set was heated.

There was a panoramic moon roof that extended over the rear seats. There was a piano black template over the control area. I don’t call it a center stack because it was more of a space holding the infotainment/navigation screen. Framing it were a number of control buttons for the camera that I turned on and checked the surrounding area while the Murano was parked. It came on automatically when I put it in reverse. It gave one of the best overhead views that I’ve seen.

Under the infotainment screen was a most minimalist climate control panel. But it had all the standard mechanisms: you could sync both sides, set the mode, set the temps, heat and or air conditioning, nothing was lacking. But the design was neat; other than two dials it was embedded into the black piano template so it was not prominent yet it was easy to see and to use.

The dash was textured and the instruments were big and easy to see as well. I noticed that the lettering on everything seemed bigger. I was impressed that the TFT screen between the odometer and speedometer had a compass so that you didn’t have to take your eye that far off the road.

I climbed into the back seat and found plenty of space. There was plenty head room, leg room and hip room. Covered with quilted leather, they looked just as plush as the front seats. But they were fixed, meaning they could not be adjusted. I found the seat backs a little too straight. If I had to sit in the rear for any real time I’d be shifting positions to get comfortable as I was doing after a couple of minutes. That was my only complaint about the Murano.

When I looked I thought the cargo space was expansive. With the second row seats up, there was 31.1 cu. ft. of space. With those seats folded that cargo space opened up to 65 cu. ft.

Comfort features included intelligent cruise control, front and rear parking sensors, a 10-way power driver’s seat and power front windows with one touch up and down. That brings me to my other gripe. The back power windows were not fully automatic.

The 2019 Nissan Murano Platinum AWD was a well-equipped crossover and more than worth its $46,420 as tested sticker.