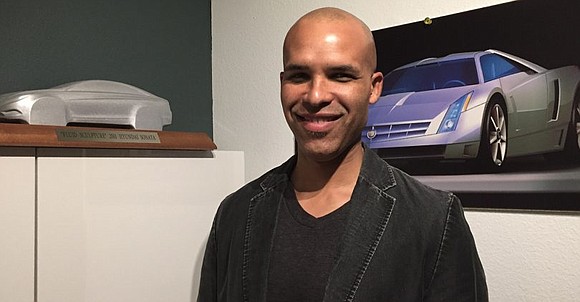 Jeff Fortson: Is the Nucleus based on a zero emissions vehicle?

Andre Hudson: The Nucleus is not based on a particular zero emissions vehicle but it is a zero emissions vehicle. The basic layout was designed to be fully electric, with the possibility of a hydrogen fuel cell supporting the battery system. Ultimately, it is about the pushing the usable interior space to the max. When level 5 autonomy becomes feasible, we will be able to remove the steering wheel and driver controls all together and use that space more efficiently. (Level 5 autonomy makes the vehicle completely self-driving.)

JF: What role did the U.S. studio that you oversaw play in the creation of the Nucleus?

AH: While the Nucleus was a global project for Icona Design, the U. S. studio led the project with all of the concept sketch development, which consisted of concept ideation and clay model development for the exterior. We also began the initial digital development of the interior in the US. As the concept size grew and came into formation, we used our global resources in design, digital modeling, and engineering to complete the Nucleus.

JF: What inspired the design?

AH: Inspiration came from many places, but most directly the idea that we wanted to make a larger mono-volume vehicle (essentially a van) into the most beautiful and sensual shape that we could. No matter what concept vehicle shapes you see produced every year, there is still no form as efficient as using a box for interior volume.

When we looked at larger vehicle designs, particularly yachts, we see this idea of a aero (or hydro) efficient shape surrounding beautifully appointed living quarters. In many ways the exterior of the Nucleus is a similar idea. On the interior we actually looked at high-end architectural spaces like those find in various premium resorts around the world and even first-class appointments found on today’s large capacity airliners.

JF: What makes the interior of the Nucleus unique?

AH: The interior of the Nucleus was meant to surprise you as you stepped inside and took a seat. It was to be the most non-automotive feeling space one could imagine. We really wanted it to feel as though you were truly in a modern lounge or a hotel suite.

It is interesting! Pictures really do not do the space justice. You have to sit in it and take in all the lines, the light and the ambiance. We did everything possible to optimize the vehicle layout. The batteries were packaged under the floor, with full autonomy, there was no space required for the steering wheel and typical driver controls, and we packaged the motors for the drive system within each of the 28-inch wheels.

Essentially, all the mechanicals (devices normally in a vehicle) were pushed outside the passenger space. This allowed us to structure the interior more like a hotel suite or a rolling lounge. When the large single sliding door and hatch opens, you see a space that is warm and inviting. Three distinct seating areas present themselves, which are finished in cream and deep blue leather. A warm, indirect light feature leads your eye from the front to the rear (this feature also is an abstraction of our Icona logo). And a beautiful deep blue wood veneer spans the floor from front to back. We divided the space up into three key zones: the office, the lounge and the loft.