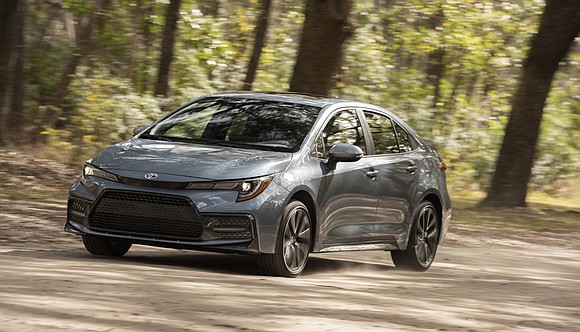 If not for the Corolla Toyota may not have survived in the American car market. It was small, fuel- efficient and reliable which was just what the driving public wanted.

More than 50 years later, 50 million plus copies have been sold worldwide, making the Corolla the best- selling car ever. And despite a market that has turned sharply towards crossovers and SUVs, Toyota vowed not to turn its back on sedans as it introduced here the 12 generation of the Corolla.

Other than the wheelbase, which is still the same at 106.3 inches, everything else has changed. The car is wider. The front overhang has been shortened while the rear overhang has been lengthened; neither by much but enough to improve the overall balance of the car.

For 2020, the Corolla is shorter overall, the hood has been lowered by 1.4 inches and the center of gravity has been lowered. They also lowered the side view mirrors and attached them to the front doors. What all this “lowering” has done is create an open airy passenger cabin.

The front seats were redesigned and I found them very comfortable, sort of form fitting, especially around my lumbar. Even the backseats, traditionally a cramped area in compact cars, were relatively comfortable. I had a good bit of leg room as well as ample headroom.

Toyota has created a Corolla for just about every driving appetite in the community. There were six trim lines and for the first time there is a hybrid.

The L, LE and LV HV are for entry level consumers. The SE is for the sporty minded; it has two transmissions, a six speed manual and a CVT with a first gear that gave it some snap. The XLE is, in a word, loaded. The XSE as Toyota put it represents the best of both worlds.

Count the hybrid and there were three engine offerings. The gasoline electric had a 1.8-liter four cylinder engine that made 121 horsepower and 105 pound-feet of the torque. It had a CVT, regenerative brakes and the Nickel Metal hydride battery was under the rear seat.

That gave it a lot of balance and the car didn’t see too heavy for the suspension. Toyota continues to stick with the nickel metal battery. Though heavier than Lithium-ion and more power dense, nickel metal cost less. Sometimes money does matter. This engine was rated 53 mpg in the city, 52 mpg on the highway and 52 mpg combined.

Well this was a hybrid and it had all the characteristics of such an engine. On one hand it was extraordinarily quiet, smooth and certainly fuel efficient, though we didn’t drive it that far. On the other hand, there was no power to speak of as with most small engine hybrid engines.

The 1.8 liter four-cylinder engine used in the gasoline powered Corolla made 139 horsepower and 126 pound-feet of torque. With the manual, the L trim got 30 mpg in the city, 38 mpg on the highway and 33 mpg combine. With the CVT it got the same mileage. In XLE trim it got one mile per gallon less across the board.