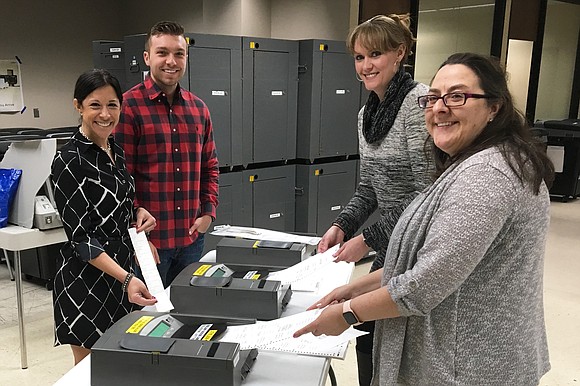 Will County Clerk Lauren Staley Ferry (from left), is joined by Election Analysts Brandon Swiderski, Mary Pedersen, and Rebecca Leder in preparing for the upcoming Public Test of voting tabulators that will be used in the April 2 Consolidated Election. The Public Test is scheduled for 9 a.m. on Monday, March 18, at the Will County Office Building, 302 N. Chicago St., in downtown Joliet. Members of the public are encouraged to attend.

A Public Test of the voting tabulators to be used on Election Day will be held at 9 a.m. on Monday, March 18, at the Will County Office Building, 302 N. Chicago St., in downtown Joliet.

Staff from the Will County Clerk's Office will conduct the Public Test in the County Board Room on the second floor.

Representatives of the political parties, the press, and members of the public are invited to attend. Representatives from the Will County State's Attorney's Office also will be present.

The Public Test is required by Section 24B-9 of the Illinois Election Code.