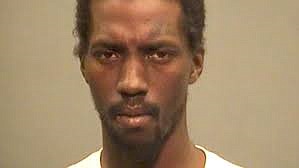 Arrested, booked, and transported to the WCADF was Robert A. Watson (25, Chicago) for the Offense of Murder.

On 03/24/19 at approximately 9:57pm, Officers responded to the Harrahs Casino Hotel reference to fight where someone might have been stabbed. Officers located the victim, Emanuel M. Burgrino, (76-year-old male from Hales Corners, WI) in a hallway of the hotel with stab wounds to the chest and neck. Burgrino was transported to St. Joseph Medical Center where he later succumbed to his injuries. Officers were able to determine that as Burgrino left his hotel room, the suspect attacked him. The suspect then stabbed Burgrino and left the hotel prior to police arrival.

This afternoon at approximately 01:25pm, Officers responded to the Joliet Public Library located at 150 North Ottawa Street reference to a subject who matched the description of the person of interest. Officers located the subject, identified as Watson, on the second floor of the Library. Watson was wearing clothing similar to what was seen in the surveillance photos. Watson was taken to the Joliet Police Department to be interviewed in reference to the case without incident. During the course of the investigation, Detectives were able to determine that Watson was the person who fatally stabbed the victim at the Harrahs Casino Hotel hallway. Detectives are still investigating what led Watson to attack and fatally stab the victim. Watson was arrested for the above listed offense.