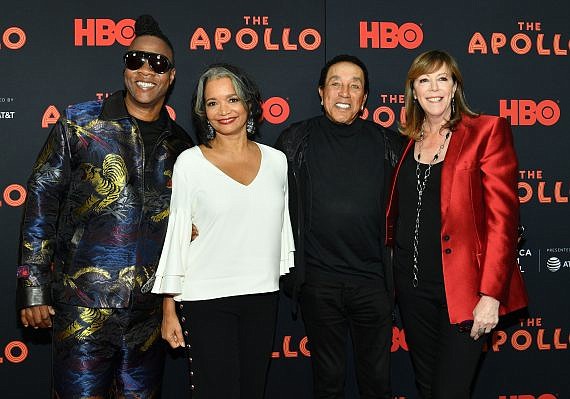 For the first time in its history, The Tribeca Film Festival held its Opening Night in the African American community with the World Premiere of the HBO Documentary The Apollo from Oscar-nominated director Roger Ross Williams (the Oscar-nominated bittersweet “Life, Animated” and the devastating “God Loves Uganda”).

The Apollo chronicles the 85-year history of what is arguably the most iconic entertainment venues in the nation. What started as a midtown vaudeville house in the 1930s which was then moved to Harlem by its co-funder Frank Schiffman, grew into the world's leading stage for black entertainment.

The film contains priceless rare footage of the most famous names in the world of show business from their earliest performances. We see a young Ella belting out her first hit, a nine year old Leslie Uggams, the youngest performer to ever grace the Apollo stage, a 13 year old Lauryn Hill, who was roundly booed at the world famous Amateur Night and her later triumph as a headliner of the hit TV show Live at the Apollo.

Among the most arresting early images is that of a 19 year-old Billy Holiday defiantly singing Strange Fruit, perhaps the earliest protest song, which the owners of the Apollo were dead set against her performing. The stage of the Apollo was where James Brown proclaimed "I'm Black and I'm Proud!" and where a 12 year old "Little" Stevie Wonder belted out his dazzling "Fingertips" debut on the harmonica. Its also where comedians like the pithy Moms Mabley and a very raunchy Redd Foxx wowed audiences with their lascivious humor and the new breed of black comics like Dave Chappelle honed their biting wisecracks.

Luminous Harlem voices such as long-time Harlem Congressman Charles Rangel ground the documentary in the grim reality of racism that lurks as a common lietmotif throughout all of high-stepping and gaiety. "People talk about all those 'glory days' of Harlem with the Cotton Club, but black people couldn't go in those clubs as patrons. The only place you saw black people was on stage." The Apollo also features interviews with artists including Patti LaBelle, Pharrell Williams, Smokey Robinson, and Jamie Foxx.

The Apollo details how the theatre has created opportunities for new talent to be seen and has served as a launch pad for a myriad of artists including Billie Holiday, Aretha Franklin, Ella Fitzgerald, Diana Ross & The Supremes, Stevie Wonder, The Jackson 5, Luther Vandross, Dave Chappelle, Lauryn Hill, Jimi Hendrix, and others.

The film, while celebrating its role as the epicenter of black entertainment, doesn't flinch from its origins against the backdrop of racial strife. Indeed, the very existence of the Apollo Theatre is a result of racism. Black performers virtually had nowhere else to perform. For years, the Apollo was the only game in town if you wanted to work as a black performer.

The film recounts the theatre's darkest days when changes in the entertainment industry forced the theatre to close its doors in the early '80s, to be rescued by former Manhattan Borough President and businessman Percy Sutton. After running a $2 million deficit for several years, he had the foresight to turn the theatre into a not-for-profit entertainment foundation, with educational programs and community outreach programs aided by funding from the state and corporate sponsorship and private donors. A Board of Directors made up of leaders from the business community, local leaders and entertainers now oversees its programs and operations.