“The Undefeated” by Kwame Alexander 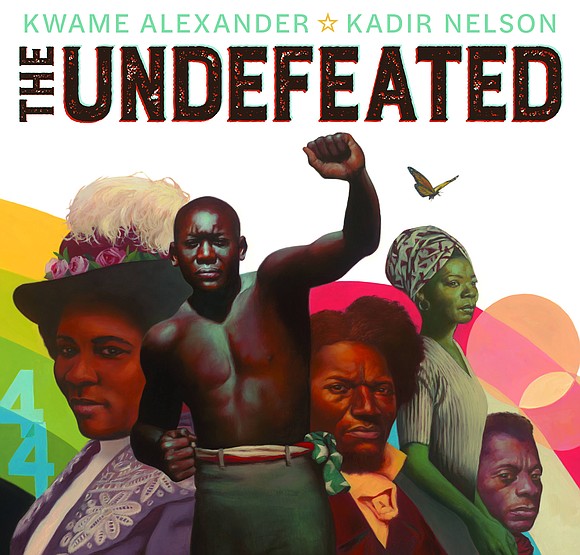 But, ah, well, you didn’t get it. You worked and you begged and maybe you even saved but you didn’t get what it was that you wanted. You were sad, but you got over it. You’ll try again, work harder, save more and, as in “The Undefeated” by Kwame Alexander and Kadir Nelson, one day, you’ll reach your goal.

This book is just for you. But it’s something you have to share because it’s “for the unforgettable,” too. It’s for those people who opened the doors to all kinds of new opportunities for everyone, but they never became famous for it.

It’s for soldiers and dancers, marchers and players, boxers and parents and kids, and it’s for you. It’s for Black lives that matter and for the people who never got a chance to know that. It’s because of the “unspeakable.”

Share this book for those who won’t be stopped, who’ll keep dreaming and reaching and imagining and proving. It’s for the athletes we know, and for the ones we don’t know about yet. It’s for performers we sing along with, and for songs not written. It’s for those who tried and tried until the last breath they had.

“The Undefeated” is one of those things that’s really had to nail down.

It’s a quick read that may be too quick for some kids; it’s over almost before it begins because author Kwame Alexander’s words are spare and not very attention-grabbing for the very youngest of children. It doesn’t help that the picture-book-style illustrations are attractive but they aren’t particularly colorful or active.

For gradeschoolers, none of that will matter because “The Undefeated” is a poem set to picture and it’s inspirational for them, especially if they’re just learning about African American history. But there’s a possibility for those kids that the power behind the illustrations by Kadir Nelson might be missed because the stories of the people in this book are at the end and not always with the pictures.

Adults, however, might find this book to be a treasure. Alexander’s poem pulses with strength and the artwork, from an adult’s POV, is perfectly rendered. You may recognize the people depicted – and if not, there’s always the back of the book.

The trick, perhaps, is to carefully share this book with the child you love, explain, and let it spark conversation. Once kids understand, “The Undefeated” is a book they’ll want very much.