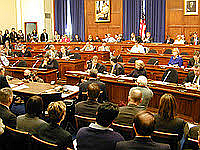 This week, the House Financial Services Committee, held a markup of five bills and two resolutions to promote responsible innovation through financial technology, crack down on money laundering and illicit finance, protect small businesses and investors, and uphold consumer protections.

HR 1988, the Protect Affordable Mortgages for Veterans Act of 2019, bipartisan legislation which would ensure that a group of U.S. Department of Veterans Affairs (VA) loans which were inadvertently made ineligible for securitization by Ginnie Mae are made eligible, and thereby enabling those banks to make additional loans, including to veterans. This bill was introduced by David Scott (D-GA) and Rep. Lee Zeldin (R-NY). It was approved on a voice vote.

HR 2409, the Expanding Access to Capital for Rural Job Creators Act, bipartisan legislation that would require the U.S. Securities and Exchange Commission (SEC) to identify unique challenges rural small businesses face in securing capital, and to describe the most serious issues that these businesses and their investors face in its annual report to Congress. This bill was introduced by Cindy Axne (D-IA)and Rep. Alex Mooney (R-WV). It was approved on a voice vote.

HR 2514, the Coordinating Oversight, Upgrading and Innovating Technology, and Examiner Reform Act (COUNTER Act), bipartisan legislation that closes loopholes in the Bank Secrecy Act, increases penalties for those who break the law, and helps provide financial institutions with new tools to fulfill their obligations under the law. This bill was introduced by Emanuel Cleaver (D-MO)and Rep. Steve Stivers (R-OH). It was passed by a vote of 55-0.

HR 2515, the Whistleblower Protection Reform Act, bipartisan legislation that expands whistleblower protections by amending Dodd-Frank to clarify that whistleblowers who report misconduct to their employers and not to the SEC also have protections against retaliation under the law. This bill was introduced by Al Green (D-TX)and Rep. Bill Huizenga (R-MI). It was approved on a voice vote.

HR 2534, the Insider Trading Prohibition Act, legislation that creates a clear definition of illegal insider trading under securities laws so that there is a codified, consistent standard for courts and participants in financial markets, and to better protect the hard-earned savings of millions of Americans. This bill was introduced by Jim Himes (D-CT). It was approved on a voice vote.

Resolution #1: Establishes the Task Force on Financial Technology, which will examine the current legal framework for fintech, how fintech is used in lending and how consumers engage with fintech. The Chair of the task force will be Stephen Lynch (D-MA).This resolution was adopted by unanimous consent.

Resolution #2: Establishes the Task Force on Artificial Intelligence or “AI”, which will examine the impact of automation and machine learning and how companies and consumers can use AI to improve their lives. The Chair of the task force will be Bill Foster (D-IL).

This resolution was adopted by unanimous consent.

At the request of Rep. Carolyn Maloney (D-NY), the Committee postponed further consideration of H.R. 2513, the Corporate Transparency Act of 2019, which was introduced by Rep. Maloney (D-NY) and Rep. Peter King (R-NY), until the next full Committee markup.