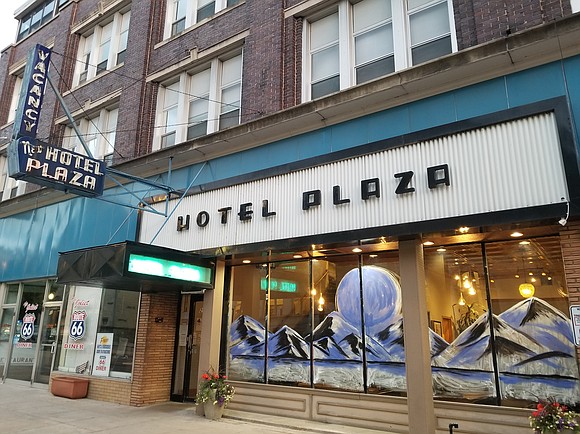 The city of Joliet will consider paying half the fee for a study to see if a hotel can be redeveloped into apartments, as part of an overall effort to revitalize downtown.

On May 13, the Economic Development Committee voted to recommend that that City Council approve an $11,000 payment for a feasibility study, in an effort to create a redevelopment plan for the Hobbs Hotel/Hotel Plaza at 26 W. Clinton St. that would benefit both the site and the downtown area. “It’s a feasibility study, to basically get from where the Hobbs Hotel is now to something that is more consistent with what our downtown plan calls for, and what the market has now proven itself to be in downtown with regard to residential development,” said Steve Jones, Economic Development Director for the city of Joliet.

Over the past year, the city and the hotel owners of the site have been in discussions regarding redevelopment of the property. The hotel was built between 1908 and 1910, and was renovated in 1951, with subsequent modifications along the exterior.

The four-story building totals 49,000 square feet, including the basement, with the ground level holding 8,600 square feet of commercial/retail space. Currently, the upper floors operate as a single room occupancy residential development, with a small hotel component.

The property consists of 98 total units, but 20 of those units are currently unsuitable for occupancy.

The city's economic development team said the site is a target for future development, but requires extensive interior upgrades, as well as exterior façade improvements to restore its historical elements.

The property has potential to provide one and two bedroom residential units, which fit into a growing demand in the downtown area according to city officials. Apartment rentals would run between $600 and $1,300 per month, depending on size.

The long range plan would be to restore the original storefront, remove non historical elements, and lighting improvements. The property is also located adjacent to the proposed public plaza improvements slated for the Chicago Street plaza. Redevelopment will require public incentives. City officials said those incentives may be a useful tool in directing future redevelopment in a direction that will support the Joliet Downtown Plan and create additional market rate apartment availability.

A redevelopment plan must occur for incentives to be considered, but the hotel's owner is first looking for a feasibility study on the project.

Per the staff report, "the need for redevelopment at 26 W. Clinton St. has been a long-time topic of discussion as it relates to continuing our forward momentum downtown. This feasibility study represents a first step to identify the costs and design elements necessary to achieve a successful transition of the property."

The consultant proposed for the study, RATIO of Chicago, was selected by the property owner based upon past work. RATIO is currently under consideration for a contract with the city to develop its comprehensive plan. The full council will take up the issue at the first meeting in June.