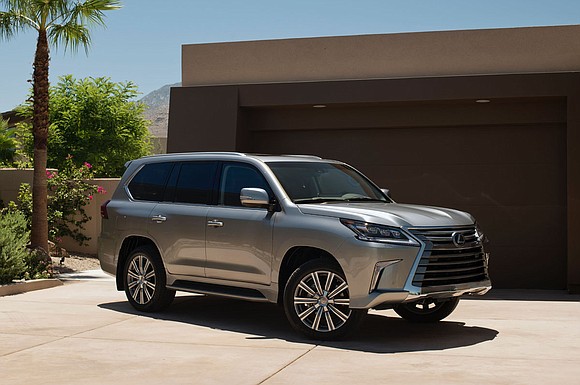 I thought that big body on frame sport utilities were, well, obsolete. But I was wrong. After spending a week test-driving the 2019 Lexus LX 570, I’ve learned that it is still an admired aspirational vehicle.

More than once I was asked for the keys, or whether I was driving it.

During my week with the LX, I discovered it was a spacious powerful sport utility. Under the hood was 5.7-liter normally aspirated V8 that made 383 horsepower and 403 pound-feet of torque.

It should not matter in this price range but for the record the EPA rating for this LX 570 was 13 mpg in the city, 18 mpg on the highway and 15 mpg combined.

Ninety percent of the torque is available at a relatively low 3,600 rpm. The engine was mated to an eight-speed automatic transmission. This LX could tow up to 7,000 lbs.

I had no plans to pull anything but the horsepower and torque made my test vehicle immediately responsive to my input. I thought cornering was good; they did a great job with the suspension. There were very few times that I could feel the LX’s weight and handling very good. There was not many times that the full size luxury vehicle felt like a truck.

The LX was a sport utility in every sense of the phrase. Put another way, this was indeed a vehicle capable of rugged off road driving. It had five off road settings: rock, rock and dirt, mogul, loose rock and mud and sand.

There was low range gearing for what Lexus termed slow-speed crawling. The LX also had turn assist control and variable gear ratio steering and hill start assist. All of this of course was for really true off-roading, not driving up on the lawn.

Of course the LX had the spindle grille, which has become synonymous with Lexus. It had 20-inch five-spoke wheels and it was outfitted with two rows of seats; three rows are available.

There were a bunch of safety features including pre collision with pedestrian detection, lane departure alert, intelligent high beams and all speed radar cruise control.

I found the lane departure alert to be mild but effective. That is important in a full size utility like the LX 570. It will drift out of the lane because of its size. The alert keeps the driver aware, thus, in the lane and it is not robust enough to make you turn it off. That’s awfully important in a vehicle of this size. Adaptive cruise control was also part of the package.

Inside the 2019 Lexus had the ambiance of subdued elegance. There was subtle leather trim everywhere, stitching and wood veneer trim. Since there are five choices, it is hard to say which type I had but my guess is dark brown walnut.