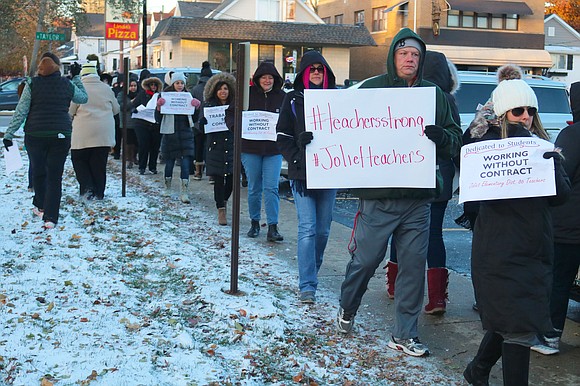 Teachers for Joliet Public Schools District 86 took to the streets of Joliet Tuesday rallying for a new contract. Dozens stood outside the district’s administration center to make their voices heard. The district and officials for the Council 86 of the Illinois Federation of Teachers Local 604 have been contract negotiations since January. “I couldn’t be prouder of the people that I represent coming out every time we ask for their support,” said Lisa Kreml, the secretary for the bargaining unit. “These teachers come every day for the kids of Joliet—no matter what we’re faced with.” Both sides were in talks Tuesday as demonstrators held signs and encouraged motorists to honk their horns in support of the cause. The union members said they don’t feel supported by the district.

“We have a variety of sticking points currently,” Kreml said. “We have language in our current contract that is not supportive to our teachers continuing to do what they do in the classroom.” Kreml added that teachers are being mandated to do things that are beyond their contract. The union members are seeking an increase in salary. “Money is not what it’s all about,” Kreml said. “We’re asking for an increase of salary because of the extra work expectations that are put onto us and seeking a fair contract for our students, our community and our teachers.”

In its published proposal, District 86 contends it has not engaged in the layoff of teachers, and the current salary and benefit package are such that the district generally does not have any problems with recruiting new teachers. Kreml referenced another section of the district’s proposal, saying it is not accurate. “The district has indicated that the union left the negotiation table after one hour of negotiating in a meeting,” she said. “We left that table after they came back with a status quo--meaning no changes.” The most recent bargaining district between the district and the teachers bargaining unit expired in August. As such, the district’s teachers have been working without a contract in place.