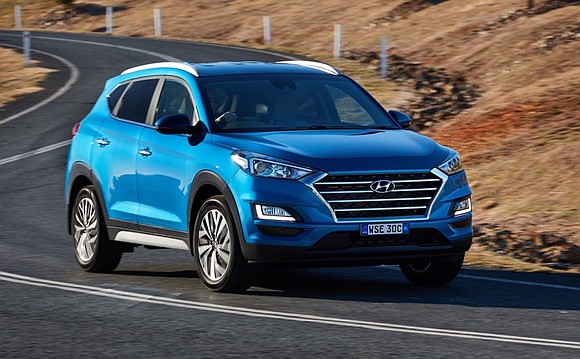 A Hyundai Tucson was delivered on Friday and we were on the road to Chicago early Sunday morning. In short, this Hyundai had Interstate chops.

We engaged the front-wheel-drive crossover’s adaptive cruise control and headed west down I-94.

The 2.4-liter, direct-injected four-cylinder engine made 181 horsepower and 175 pound-feet of torque. It was mated to a six-speed automatic transmission with manual shift capability. That was more than enough oomph.

This stretch of highway gently curves south and goes around the southern tip of Lake Michigan. It is two-lanes in one direction and expands to three as you approach the metro areas. And this route to the Windy City is almost flat. In other words, there is really no place to test how well the engine, its torque and its transmission can handle hills.

Still, the drive revealed some of the characteristics of the 2019 Hyundai Tucson FWD. First the pavement was dry. Therefore, power to the front wheels provided enough traction; what’s more the Tucson was easy to handle.

We engaged the adaptive cruise control. The system was easy to use and reliable. We wish that braking would engage sooner, however, we did not change the follow distance; that may have eased our anxiety but we doubt it. We still haven’t gotten used to automatic braking.

The one unsettling thing about the Tucson’s adaptive cruise control system is that when changing lanes where there is a slower moving vehicle braking could be robust. That much slower pace lasted until the system could calculate the distance and the speed of the vehicle ahead and then adjust the Tucson’s speed. The abrupt braking may have been necessary but it was still unsettling until we got used to it, in other words until we adjusted ourselves.

The Tucson was a comfortable crossover, especially on the four-hour drive to Chicago. The seats were comfy. Though the crossover had a navigation system, we didn’t need it. We had a choice of entertainment: radio, satellite radio, Apple CarPlay as well as Android Auto.

We needed to manually plug our smartphone into one of two USB jacks to use CarPlay. We did but still there were some unexpected drops. We took and made a couple of phone calls. All-in-all the hands off system responded without too many glitches.

There was a sport drive mode we never used and were a bit surprised that there was not an eco-mode. The 2019 Hyundai Tucson had a fuel rating of 22 mpg in the city, 28 mpg on the highway and 25 mpg combined. They were good numbers but with a 2.4 liter natural aspirated engine it seemed like mileage could have been a little better. Still, we got to the Windy City with a bit more than one-quarter of tank of gasoline left.

The interior of our test crossover was black. The instrument panel was analogue with a digital TFT screen between the odometer and speedometer. Each was black with white numerals reversed out. The odometer had the temperature gauge at the bottom while the speedometer held the fuel gauge. It too was at the bottom.