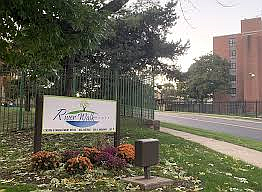 The state of the redevelopment effort at Riverwalk Homes was reviewed at Tuesday’s meeting of the Joliet City Council. Council members made a decision last year to move forward with redeveloping the apartment complex formerly known as Evergreen Terrace. Andrea Keeney, senior management developer for Holsten Real Estate Development Corporation, said some key dates in the Riverwalk Homes redevelopment timeline are nearing. Holsten Real Estate Development Corporation is turning to the city of Joliet in regards to a pre-development loan, which is pending approval by Oct. 15. “In talking about engaging architects, obviously there’s a cost with that,” she said.

Holsten Real Estate Development Corporation is eying an anticipated $2 million pre-development loan from the city, which officials said is more cost-effective than turning to other lenders. A request for proposal for architectural services was issued Sept. 12. “We’ve solicited 12 architectural firms that all have affordable housing experience,” Keeney said. Keeney said it is expected there will be nine proposals submitted by Oct. 29. A selection committee, made up by members of city staff and representatives for Holsten Real Estate Development Corporation, will be tasked with narrowing down the list of possible architectural firms. An architectural firm could be selected by early December. At that time, the architect will begin hosting meetings to talk about design and working on design drawings.

Holsten Real Estate Development Corporation and the city are eying the prospect of the Illinois Housing Development Authority issuing tax credits to help move the redevelopment effort forward. “We would expect to hear from them at about April of 2021, and assuming—fingers crossed—that we’ve received the allocation of tax credits, we would expect project closing and construction commencement by the end of 2021,” Keeney said. The construction is anticipated to take 16-18 months, and relocation needs to be completed prior to the start of construction.

A beacon for the community-at-large

Relocation, whether it is permanent or temporary, remains on the horizon for residents of Riverwalk Homes. A presentation to the city council highlighted the various ways Holsten Human Capital Development is working to make a difference. Elizabeth Protich, program director for Holsten Human Capital Development at Riverwalk Homes, said assistance has come in more ways than one. “The community has really wrapped their arms around Riverwalk Homes,” she said “We have had really an outpouring from all the social service agencies and health agencies in the area.” With support from the Northern Illinois Food Bank and the Will County Center for Community Concerns, Riverwalk Homes is able to operate a food pantry on site serving more than 500 households per month, which translates to more than 1,000 people every month.

Riverwalk Homes has a number of other area partners, including the Will County Health Department, Joliet Junior College and the Joliet Park District. A monthly resource fair is hosted on site giving residents access to a number of agencies and community organizations. Protich said they work for the stabilization of households, and they have a great focus on education and employment. Employers come on a regular basis to do interviewing and hiring on site. Joliet Junior College helps provide GED classes on site. “We are the only GED Class that has open entry and hopefully to have daycare on site,” Protich said. An after-school program is coming on site beginning in November. “I really think Riverwalk Homes is starting to become an anchor in the community,” Protich said. Protich said they strive to reach residents of Riverwalk Homes at their level of need.

Case management is completed for all 356 households at Riverwalk Homes. “We take referrals from property management, if there’s an issue with any of the residents,” Protich said. “To date, since Holsten came in, we have 464 referrals, which means we have visited households at least 464 times.” Protich wanted it to be clear that services offered at Riverwalk Homes are open to anyone in the Will County area. “I will say the pantry has really opened the flood gates for that that we have more and more people,” Protich said. “You’re hearing less and less of Evergreen. … The stigma is gone away. We are now Riverwalk. We are no longer Evergreen, and we take great pride in that.”

Councilwoman Bettye Gavin said she knows how much a difference time makes. “The impact is there, and we can see it, and we can feel it,” she said, referring to the services at Riverwalk Homes.