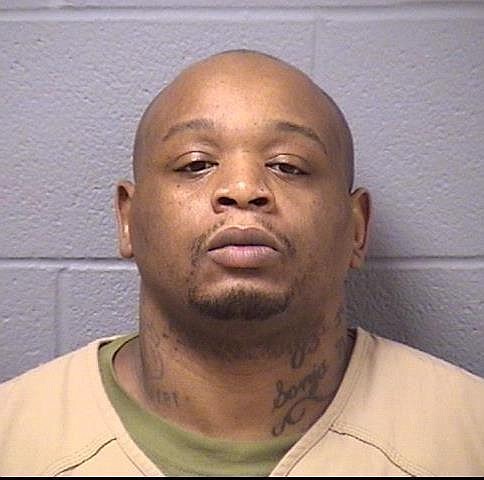 Will County State's Attorney James Glasgow has announced that Chandel Dirkans, 37, was sentenced Monday October 28 2019 by Circuit Judge David Carlson to 118 years in prison for multiple criminal sexual assaults against a Joliet teenager in 2015.

Dirkans was found guilty in August 2019 on 17 counts, including 10 counts of aggravated criminal sexual assault, 5 counts of criminal sexual assault, 1 count of aggravated unlawful restraint, and 1 count of aggravated domestic battery against the female juvenile. He also previously pled guilty to one count of "armed habitual criminal." The victim was 16 at the time, and the acts occurred inside the home in which they both resided on the 600 block of Grant Street. "This young woman lived through a horrendous nightmare in her own home when Dirkans brutally and repeatedly sexually assaulted her," Glasgow said. "The sentence handed down today drives a stake straight through the heart of the beast. This savage predator will never have the opportunity to brutalize another young woman."

Dirkans, the brother of the victim's stepmother, sexually assaulted the teenager five times over a nearly three-hour period on November 5, 2015, while other family members were at work. The victim testified that Dirkans, whose neck bears a "Pssy Monster" tattoo with a picture of a mouth, lips and tongue, placed her in a chokehold and dragged her into an upstairs bedroom at which time she lost consciousness. After she regained consciousness, Dirkans said to her, "You're either going to let me F you, or I'm going to kill you." He then proceeded to sexually assault her while wielding a black-handled knife.

The victim further testified that Dirkans led her downstairs to the kitchen, where he grabbed a red-handled knife and plastic wrap and sexually assaulted her twice, utilizing the plastic wrap as a condom. Dirkans then led the victim to the basement where his bedroom was located, and twice sexually assaulted her. Following the assaults, Dirkans forced the victim into a vehicle and drove her around. He drove her back to the residence and threatened that he could kill her if he wanted to as they sat parked in the driveway. He eventually released her from the vehicle. Dirkans surrendered to police after a multiple-hours standoff during which he had barricaded himself in the home. Judge Carlson found Dirkans guilty on all counts presented at the four-day bench trial.

At the time of the assaults, Dirkans was on parole for a 2009 conviction for residential burglary. He also had previous convictions for unlawful use or possession of a weapon by a felon, robbery and burglary. Glasgow credited the entire team for the result in this case: prosecutors Kelly Tebo, Thomas Slazyk, and Elizabeth Domagalla; the entire Joliet Police Department with special thanks to John Ross and Shawn Filipiak; victim witness advocate Nichole Pasteris; and Jackie Lundquist, who conducted the victim sensitive interview at the Will County Children's Advocacy Center.