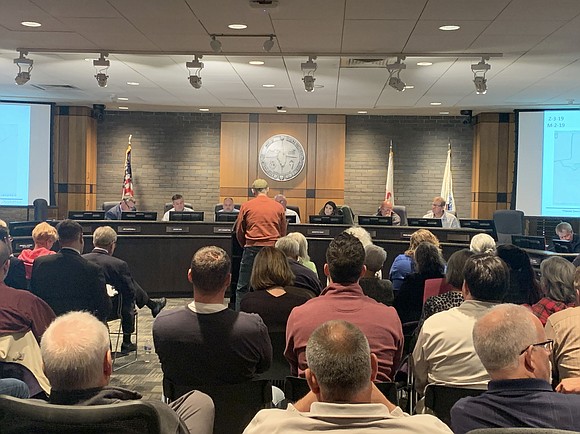 The Community fills council meeting to voice concerns about development that will be near Rowell Avenue.

There was standing room only for some people at a recent meeting of the Joliet Plan Commission, as it sought to review a zoning change requested by Northpoint Development. In a unanimous decision, the panel voted in support of recommending plans for future light industrial development. Northpoint Development is the applicant behind the controversial development that stirred resistance from Elwood residents in recent years. The petitioners, Dan and Leah Light, are seeking reclassification of 103 acres located on the south side of Breen Road and one-half mile east of Rowell Avenue from R-3 Single-Family Residential and R-4 Multi-Family Resident to I-1 Light Industrial. Community Development Director Kendall Jackson pointed out that the proposed plan is not consistent with the city’s south side comprehensive plan.

Tom Osteberger, an attorney for the petitioner behind Northpoint Development, approached the Joliet Plan Commission, explaining why it makes sense for this residentially zoned property to be reclassified. “While this does not comply because we’re seeking a map amendment because of that case, it contemplates the change,” he said. The south side comprehensive plan is meant to serve as a guideline. “It calls out the suitability of industrial for this area,” Osteberger said. “It knew there would be changes.” Northpoint did not name a user for the property, but two conceptual plans have been submitted by the petitioner that illustrate potential site layouts.

More than 20 people signed up in advance to provide public comments at the meeting. Randy Juris spoke in opposition to Northpoint’s plans, saying he doesn’t think the proposed light industrial development will positively add to the city and its image. “You’re going to make us look like West Germany during the Soviet area,” he said. Warehouse Workers for Justice issued a statement on this topic, saying the development “could disenfranchise local residents.” “This 103 acres very well could be a part of a much larger project,” the statement read. “Along with more transparency, want to encourage meaningful and good faith dialogue among municipalities, residents, developers and other stakeholders—something we believe is not being done at the level needed to resolve the complicated problems that exist because of the proliferation of warehouses in Will County.” Danielle Meintanis said the panel’s decision will have far-reaching ramifications to the relations Joliet has with neighboring towns. “I think It’s a shame and embarrassing to even consider approving such a controversial project when the two adjacent towns and the township have already loudly denied the company,” she said. Jackson Township Trustee Matt Robbins shared that sentiment, urging the city to be a good neighbor.

Also, at the meeting, the panel postponed providing a recommendation to amend the city’s zoning regulations to account for marijuana business establishments. The state of Illinois took action earlier this year to legalize recreational marijuana, effective Jan. 1, 2020. Several people took time to speak on this topic and what it could mean for the city. The idea of municipalities allowing for recreational marijuana sales has been debated at public meetings across suburban Illinois. Among the communities of comparable size to Joliet is the city of Aurora. It recently decided to opt-in to allow recreational marijuana sales.

A Special Joliet Plan Commission meeting will take place at 4 p.m. Nov. 7 at Joliet City Hall, at which point the discussion is expected to continue.