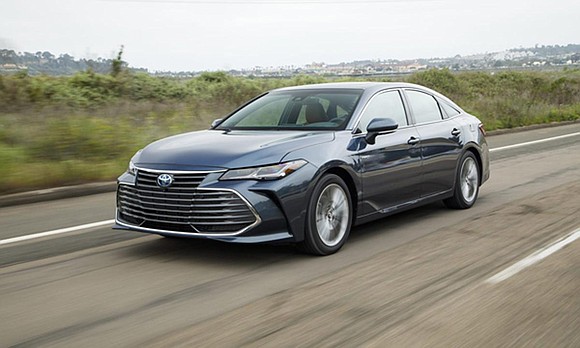 The 2019 Toyota Avalon Hybrid is an awfully good midsize sedan. The brand’s flagship car was given a complete makeover that didn’t get that much attention in a world dominated by utility vehicles.

Still, it should be noted that the 2019 Avalon Hybrid went from a fairly boring design to soothing akin to a snazzy design.

The car had a new wide grille that was dominant. Overall the new Avalon was longer, lower and wider. That really gave it a sleek appearance, especially in dark colors. Our test vehicle was opulent amber. It looked black until the sun caught it.

New stamping methods allowed for deep draw panels that expressed distinguishable sculpted forms. Complex surfaces could now be shaped, like the at Avalon’s door handles that coincided with its profile’s robust character line. A distinct, carved lower rocker panel behind the front wheels visually exemplified the benefits of its new global platform.

We had the Limited Avalon Hybrid. It was the top-of-the-line and had all the bells and whistles as they say. There were slim LED headlights, three dimensional surfaces, an aluminum hood with longitudinal lines and the new grille had tangential vents at its lower portion for passing air across the front tires.

Horizontal character lines were across the back, at the top, center, and lower portions of the car. The Avalon’s 72.8-in. width, in effect, was highlighted by the distinct sectioning. Connected LED tail lamps shaped in a three-dimensional, “aero fin” style differentiated the back from the last generation Avalon. They integrated the backup, stop, and turn lights into a single harmonious, fluid form. In short, the 2019 Avalon Hybrid looked good.

The Avalon was what Toyota called a premium midsize sedan. But it looked full size. However, it didn’t handle like a big car.

A new 2.5-liter four-cylinder engine was more fuel efficient, ran cleaner, and was more powerful than previous iterations. The four-cylinder was married to an all-new Toyota Hybrid System II powertrain that was engineered for both spirited driving and fuel consciousness. The hybrid system’s net power output was 215 horsepower – up 15 horsepower versus the outgoing version.

THS II used two electric motors – MG1 and MG2 – to supplement the charging of the hybrid system’s Nickel-Metal Hydride (Ni-MH) battery pack, while MG2 assists the engine. It was mated to an electric variable transmission, or ECVT.

Mileage was an impressive 43-mpg across the board. In other words, it got 43 mpg in the city, 43 mpg on the highway and 43 mpg combined.

The car was nowhere near as sluggish as some hybrids. Acceleration was good. Of course, there were strong-grip regenerative brakes and the battery is now under the rear seat instead of in the trunk. That created a cavernous cargo space in back.

In addition to the LED headlights, the test car had LED daytime running lights as well. There were adaptive cornering lights, turn signals on the outside mirrors, which had the blind side monitoring alert. It also had 18-inch alloy wheels.