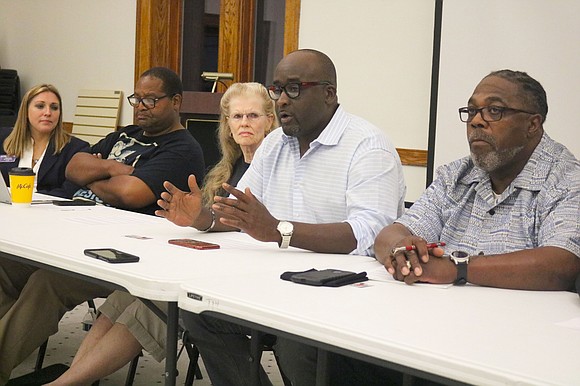 Rachel Ventura, a Joliet mother who serves on the Will County Board and recently announced plans to challenge Democrat Congressman Bill Foster of Naperville in next spring’s primary election, hosted a recent roundtable discussion to open up discussion on criminal justice reform.

Featured speakers at the event included Randy Ryder, a community activist in Aurora; Vincent Gaddis, a professor at Benedictine University in Lisle; Nicholas Richard-Thompson, a representative of the media department for the city of Aurora; Ernest Crim, a teacher at Joliet Central High School in Joliet; Charlotte Droogan, a community activist in Bolingbrook; Garland Mays, president of the Forest Park Neighborhood Council in Joliet; and Bishop Steven Evans, the founder/pastor of Leap of Faith Ministries in Joliet.

“To have fair and productive punishment, I think it all needs to be placed in a basket, looking at staggering how the scales operate in our community and affect our families versus what’s going on now,” Mays said. “It’s ridiculous. There’s a time where I look in the paper and I see different cases. They have people in treatment programs going on for those who have opioid [addictions] versus those who are arrested for crack addictions or arrested for delivering crack or any other type of drug. I just think it needs to be fair across the board and not looking at the race of the individual.”

Mays said he’s noted progress, but something has to give.

“If you look at the judicial and prison systems right now, I think that one thing is we’re getting away from incarcerating innocent black men,” he said. “What the justice system is doing now is getting away from drug offenses. They want to legalize weed and make it morally right. If you look in our black community, our families have been destroyed by that time in incarceration.”

Evans said the issue with the criminal justice system comes down to race, ethnicity and money.

“You get as much justice as you can afford,” he said.

Richard-Thompson said he doesn’t think enough has been done to ensure justice is attainable for everyone. He cited, among other things, the cash bail system, mandatory minimum sentencing and the Three Strikes Law as mechanisms that are used to dehumanize people and remove their dignity.

“When we look at data, it does not make sense to continue these predatory practices that we know do not work for what we’re trying to achieve,” Richard-Thompson said.

“Ultimately, the system is not failing, it’s actually working the way it was designed, and that’s to keep us segregated,” he said.

“You’ve taken discretion away from the judges,” he said.

Ventura chimed in, saying that having greater representation may change how the judiciary rules going forward.

During the last election cycle, Will County voters elected two new circuit court judges, both of whom are men of color.

“If we return the mandatory minimum sentencing to the discretion of the judges, that would be something that, by all means, every registered voter would want to get involved in,” Ventura said.

Droogan said she wants to see more white people come to the table to help usher in the needed change.

“The laws are the things that screwing all of us, and they are screwing white people, even though they don’t realize it because they (laws) really are destroying the soul of white people in this country,” she said. “We are complicit through our ignorance, and silence from white people is exactly the same thing as saying, ‘It’s OK.’”