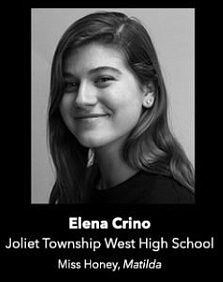 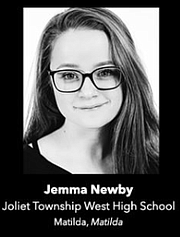 Broadway in Chicago selected two Joliet West High School performers, Elena Crino and Jemma Newby, for the 2020 Illinois High School Musical Theatre Awards: 24 Outstanding Students. Over 200 Illinois students submitted videos, of which the top 12 male and 12 female students were recognized for their excellence in musical theatre and a clear commitment to their role.

Jemma Newby was recognized for her performance as Matilda, and Elena Crino was selected for her performance as Miss Honey, both of which are lead characters in the musical, Roald Dahl's Matilda. Newby will attend Olivet Nazarene where she is considering pursuing a career in music. Crino will attend Lawrence University in Wisconsin where she will pursue a degree in Classical/Opera Vocal Performance.

Joliet West High School Music Teacher Tim DeBoer said, " Elena and Jemma have both played numerous lead roles while at Joliet West, but this year was by far the best performance for both. I'm so sorry that the performances were canceled. The cast and crew were ready to bring a magical performance to the community. This recognition is pretty special for these two deserving young artists."