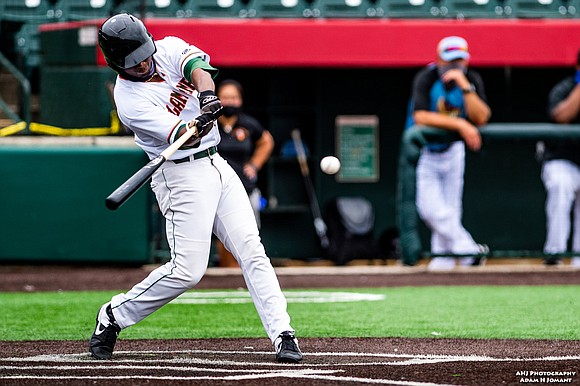 In the second game of the Sunday doubleheader, the red hot Joliet Slammers squared off against the NERDS Herd. The Slammers came into this game riding a seven game win streak. The Herd came into the night after losing to the Tully Monsters 6-1 last night. They struggled with offense with only four hits and one run in that game, and their offensive struggles showed on Sunday night.

The Slammers were the team with the first opportunity to score in the 2nd inning. Zac Taylor got on base with two outs, and moved to third base on Harrison Moore's single. The Slammers ran a designed steal play, were Taylor attempted to steal home on a throw down to second. The Herd were able to keep up as Matt McGarry's throw beat the runner at home.

In the top of the 6th, the Slammers were able to break the scoreless tie. Korry Howell and Andrew Shaps both singled to start the inning. Howell scored on a Zach Kirtley sacrifice fly to right field. Jordan Procyshen followed with a RBI-single to score Shaps. The Slammers would leave the inning with the 2-0 lead.

The Slammers threatened to break the game open in the top of the 7th. The Slammers had bases loaded with two outs with the top of their lineup at the plate. Pat Adams walked in his pinch-hit appearance, which made it 3-0. Andrew Fernandez was able to strike out Zach Kirtley to limit the damage, stranding three runners.

The NERDS Herd struggled to get runners on base throughout the game. Besides Ryan Stacy's single in the 1st inning, the HERD had no other baserunners until the 7th inning. Stacy legged out an infield single for his second hit of the night. Matt McGarry walked in in the at-bat after. Both runners would be stranded after Mario Samuel struck out Caeden Harris.

As the Herd struggled to get baserunners, the Slammers found ways to get them on. Walner Espinal walked, and Andrew Shaps singled with one out. Two batters later, Zach Kirtley singled to left field to make it 5-0 Slammers. Kirtley led all hitters in the game with 3 RBIs on the day.

One highlight from Sunday night's game was the starting pitchers for both sides. For the Slammers, Cameron Aufderheide threw six scoreless innings, allowing one hit, and struck out six batters in his first appearance as a starter this season. Wes Albert of the NERDS Herd bounced back after receiving the loss against the Deep Dish last week. Albert went four innings, surrendering one hit, with three strikeouts.

The next game of the City of Champions Cup is Tuesday night between the Deep Dish and Joliet Slammers. First pitch is scheduled for 7:05pm.