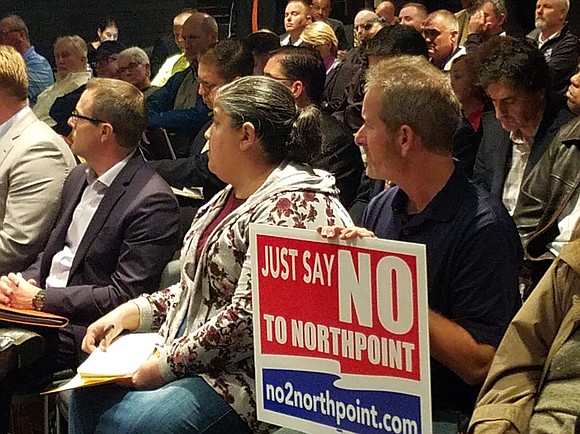 The developers of a controversial plan to bring a major warehouse development into Joliet have released results of a survey commissioned by a company they hired which claims “strong support” for the plan.

However, those opposed to the project have balked at the results from the two polls from the company and said the people who responded likely don’t even live near the proposed development.

According to a statement released along with the results, the two new polls “show strong support for Compass Global Logistics Hub as a means of creating jobs, generating revenue and providing economic opportunity for during a time when the State and Southland communities need help.”

Compass Global Logistics Hub is a warehouse, distribution and light manufacturing center planned for south I-80 and east of Route 53 in Joliet. The developers of the proposed project - Compass Global Logistic Hub and NorthPoint - have said the project is a $1.7 billion investment into the community.

After hearing hundreds of people opposed to the project, the Joliet City Council in April approved a pre-annexation agreement with NorthPoint to begin annexing 1,260 acres of property for the site.

Members of Stop NorthPoint LLC and others who are vehemently opposed to the NorthPoint Development and Compass Global Logistics Hub plan contend the polls are bogus.

“NorthPoint went as far away as Elmhurst to find a few hundred supporters of the trucking warehouses because they have widespread, overwhelming opposition here in Joliet and neighboring communities,” said Joliet native Erin Gallagher, volunteer spokeswoman of Stop NorthPoint, the legal fund of the opposition movement.

“The numbers are skewed to say the least,” said Joliet resident Bishop Steven Evans of Leap of Faith Ministries. “Where did they get their numbers from? Put this poll side by side with that city council meeting that none of us were allowed to be at, and the great number of people who spoke against it compared to the few people who supported it, NorthPoint's poll numbers don't add up.

NorthPoint has already moved ahead with purchasing much of the land for the development and it is “pretty much a done deal” as far as the City of Joliet is concerned, Joliet Mayor Bob O’Dekirk said.

The next step will be for the City Council to approve the final annexation agreement which will likely come before the council at the next scheduled meeting. A major part of the project entails NorthPoint covering the cost of a new bridge over Illinois 53 that, according to O’Dekirk and the developers, divert most of the truck traffic off of local roads.

“We made it clear that without that bridge, it doesn’t get built,” O’Dekirk said, adding that he’s confident the development will benefit the city.

“I’m happy with this development and with the infrastructure improvements that the city is demanding, meaning the bridge,” O’Dekirk added. “This City Council is being much more responsible than what’s occurred in the past with similar developments.”

The polls, conducted by GBAO and commissioned by Compass Global Logistics Hub developer and NorthPoint Development, show that voters within a 12-mile radius of the proposed site support it by a 59 to 31 margin and voters within a 35-mile radius favor it by a 57 to 21 margin, according to the statement released along with the survey results.

According to Scott Burnham, with the Chicago-based Serafin & Associates public relations firm, Compass Global Logistics Hub “enjoys strong majorities of support in Will County, Joliet, suburban Cook County and the South Side of Chicago. It also has the majority support among, Democrats, Republicans and Independents as well as among African American, Latinx and white voters.”

“Compass Global Logistics Hub will serve an economic engine for the Southland, providing financial support to many families who are struggling amid the pandemic, especially in underserved communities that have been hard hit,” said Patrick Robinson, VP of Development at NorthPoint.

In addition, after those surveyed heard messages in both support and opposition to Compass Global Logistics Hub, support remained strong, a spokesman for . Local respondents supported the proposal 60-33 percent. Meanwhile support outside the immediate area rose five points to 62-26 percent.