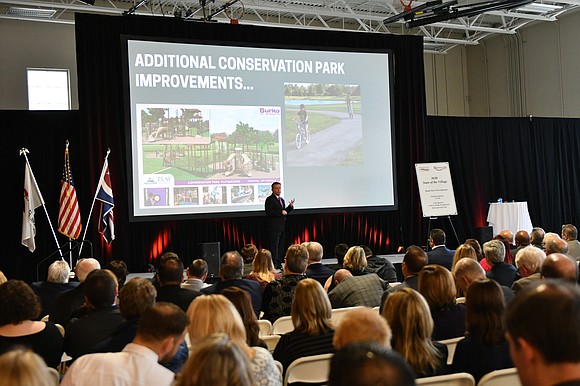 Mayor John Noak presented the Village of Romeoville’s 30th Annual State of the Village Address on Thursday. The event, which serves as a fundraiser for the Romeoville Area Chamber of Commerce, recapped the awards, events, and projects that happened in 2019 while also looking ahead to the future of the community.

Mayor Noak reported the financial outlook for Romeoville continues to be strong. The property tax rate has decreased three years in a row and is projected to continue to decline, all while the village provides new amenities for its residents. The Village's last fiscal year ended with a budget surplus of $1.9 million. Projections show the current year will also end with a budget surplus. Over the last several years thousands of new jobs have been created through robust development.

Recreational amenities continue to be a priority in Romeoville. During 2019 the village conducted upgrades to Budler Park and opened the new 51-acre Discovery Park, among other projects. Moving into 2020, grants were announced for work being done at O’Hara Woods, Volunteer Park, and Lake Strini. In conjunction with the work at Lake Strini, a new playground and upgraded paths are on tap for Conservation Park.

Additionally, the tract of land along 135th street (across from the post office) has been designated for a future dog park and open space, as well as, a new site for a future American Legion Hall. Finally, a new indoor pool and fitness center will be constructed directly to the west of the existing Romeoville Athletic & Event Center.

The continuing improvements have had a positive impact on home values in Romeoville, which is backed up by a recent article in Crain’s Chicago Business. The article illustrated Romeoville had a nine percent increase in 2019, one of the highest home value increases in Will County.

Romeoville, with its prime location on I-55, continues to attract the attention of hotel developers. Holiday Inn Express & Suites opened last November and two new hotels were revealed during today’s address: Tru Hotel by Hilton and Towneplace Suites by Marriott.

“Romeoville continues to show positive growth while maintaining fiscal responsibility,” commented Mayor Noak. “With additional assistance from grants and state funding, the village is constantly improving its infrastructure and green spaces for the benefit of our residents.”

The State of the Village presentation will be available to watch on romeoville.org in the coming days.