“Franchise: The Golden Arches in Black America” by Marcia Chatelain 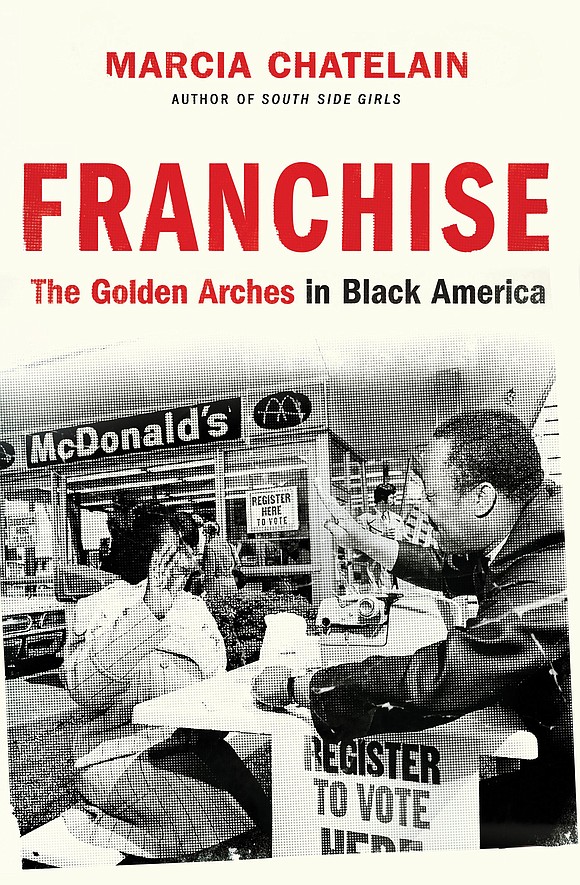 Your hand is in the bag again.

Those French fries you bought aren’t going to make it home, that’s for sure. You should’ve bought a double order; your burger won’t taste the same without them alongside. Sometimes, a craving hits and that kind of food saves the day; in the new book “Franchise” by Marcia Chatelain, that kind of food once changed neighborhoods.

What did you have for lunch today?

If you’re like a third of your fellow Americans, you ate lunch or some other meal at a fast-food restaurant. It wasn’t always so: a century ago, cooked ground beef was a food for the lower- and working-classes, not for the masses. Eventually, though, the taste of a burger and fries won over just about everyone – and then came McDonald’s which, says Chatelain, “has affected the ways Americans eat, play, and work.” The restaurant also affected the Civil Rights movement – and vice versa.

In 1961, after Ray Kroc assumed control of the chain he created, he began flying around the country in search of places to further expand his McDonald’s restaurants. There were already two in the Chicago area and they were profitable. Though both stores were then owned by white men, one store was run by a Black manager; that was fine with Kroc, as long as the place was profitable.

The idea of a restaurant that served everyone, regardless of race, intrigued African American southerners who were living under Jim Crow laws. When McDonald’s moved to their areas, segregation was in effect but the Civil Rights movement was coming, along with protests and sit-ins. Kroc tended not to get involved, preferring that franchisees deal with situations on their own.

By spring of 1968, that was no longer tenable. White-owned restaurants were an “irritation” in Black neighborhoods and after Dr. King was assassinated, resentment boiled over. Kroc decided that it was best to find black franchisees to assume ownership of such restaurants in those areas. So by the end of that year, Herman Petty of Chicago proudly opened the first Black-owned McDonald’s location…

With a sub-title of “The Golden Arches in Black America” on the cover of this book, one might think that it would include something about nutrition. It does – but not much, and not until the end. Instead, author Marcia Chatelain uses “Franchise” to focus mostly on a history of the chain itself and its business relationship with the Black community.

It’s a sixty-year account that’s tasty, but there’s not always a happy story to go along with the Happy Meal, which Chatelain explains, starting at mid-century. It’s a tale of unknowns who are usually unsung, and some that are total surprises; Chatelain also examines oft-told Civil Rights stories as they relate to the McDonald’s chain, showing history from a different spot at the table.

This is not your run-of-the-mill business book, nor is it an everyday history read. It’s actually a little of both, and worth a look. If you’re seeking something to learn and enjoy, “Franchise” has it in the bag.