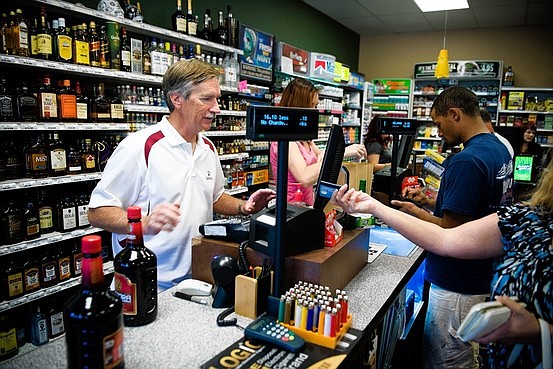 In a split vote, Joliet council members grant a liquor and gaming license to Thornton’s LLC in the predominately minority Collins Street neighborhood. No other gas station in the Joliet area including Thornton’s has a gaming license. The approval will also allow for the historic Casseday house to be saved.

The Joliet City Council passes liquor license for Thornton’s LLC to save Casseday Historic house. Neighborhood organization was against the approval. File photo by The Times Weekly

Council action issues a Class B and C liquor license to the applicant, Thornton’s LLC, that will take on the responsibility of relocating the structure.

It will help provide that the home is relocated using funds generated by a new gas station to be located at 400 Collins Street.

The city’s liquor commissioner recommended the denial of the Class B and C liquor license that allows on-site consumption and the sale of packaged liquor for off-site consumption.

“What our residents are hesitant with is the liquor license,” said Tanya Arias of the Collins Street Neighborhood Council.

Arias said she wanted her view to be made clear.

“We actually are in favor that the Casseday house be saved,” she said. “That’s fantastic. We do applaud Thornton’s for coming up with an idea that they would take on that responsibility. We just wish that the Class A liquor license wasn’t part of that.”

None of the other gas stations in the city currently operate with a Class B and C liquor license.

Arias said the liquor license could create a quality of life issue for the neighborhood and the residents.

“It’s not really that the city of Joliet has suffered from a homeless problem,” she said. “One of the centers is located on Cass Street, which is the Daybreak Center and that is in the Collins Street neighborhood. … Some of the panhandlers are going to be on the street. We don’t want them congregating around a gas station, especially if they know there’s going to be on-service liquor there.”

“This is a huge investment by us,” he said. “Therefore, we need to police our facility, make it a safe place for guests and team members, and be a great operator in their neighborhood. We intend to do that.”

Thornton’s is looking to pay about $300,000 to relocate the Casseday house.

Zarotsky urged council members to adhere to the development agreement that was passed by the city council last year.

“Please consider the precedent it sets for the city to not follow through on the terms of the development agreement approved by this board,” he said.

Councilwoman Jan Quillman said there is an exception to the rule in the case of Thornton’s, which is why the gas station should be allowed the Class B and C liquor license.

A motion to concur with the liquor commissioner’s recommendation failed when voted on by members of the city council.

Councilman Michael Turk questioned if the city could find a compromise between the city, the preservationists and Thornton’s.

“What if we were to grant the liquor license until Thornton’s has recouped their investment of $300,000, which could be anywhere from five years to eight years?” he asked.

Zazovfsky indicated at the meeting that he’s not in the position to consider Turk’s comprise.

City council action, as taken, provides that the applicant is eligible to receive a video gaming license, as well.