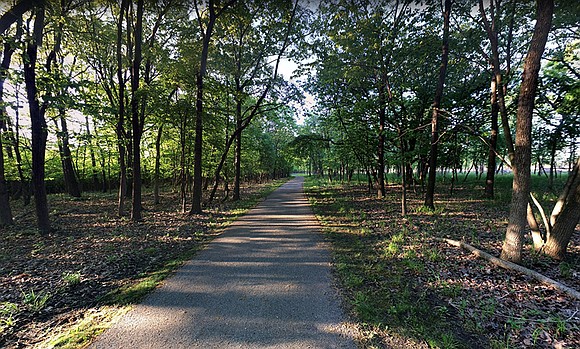 The section of the Rock Run Greenway Trail that travels through the Joliet Junior College campus and the Forest Preserve District of Will County’s Colvin Grove Preserve will be closed for an estimated four months starting Monday, Jan. 6, due to a City of Joliet sewer improvement project. Path users will be directed by signs to a detour along Houbolt Road. (Photo by Forest Preserve staff/Chad Merda)

A 2.5-mile section of the Rock Run Greenway Trail will be closed for an estimated four months as the City of Joliet works on a sewer improvement project.

The closure is began Monday, Jan. 6, and will last into April, according to city officials. The closure will affect a section of the trail Joliet Junior College owns on its campus and a portion owned by the Forest Preserve District of Will County in Colvin Grove Preserve. A detour will be posted directing trail users to Houbolt Road as a path alternative from Olympic Boulevard north to McDonough Street. The city warns that trail users should not enter the work zone and they should use extreme caution while they are in the project's vicinity.

The work is part of the city’s five-year sewer rehabilitation plan. According to a press release issued by the city, "The project will restore the structural integrity of the sanitary sewer interceptor and reduce the amount of rain water entering the sanitary system."

For more information on the sewer plan, visit www.joliet.gov/home or contact Owen Dean with the Joliet Department of Public Utilities at 815-724-4254.