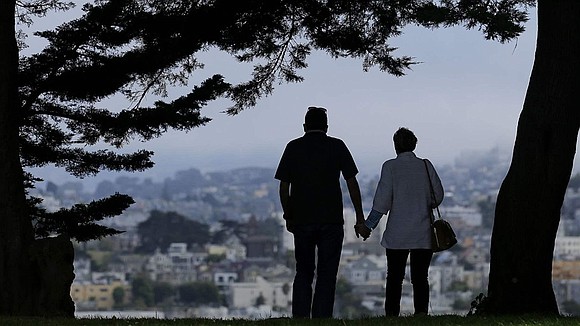 A couple of retirees hold hands as they walk under trees down a path at Alta Plaza Park in San Francisco. Many states give seniors all kinds of tax breaks, but is it fair to the young and middle-aged?

As Americans begin the challenge of filling out their tax returns this year, one taxpayer demographic generally pays less than others: senior citizens.

Tax breaks for seniors cost states approximately $27 billion a year and will more than double in the next decade, according to a recent study from the progressive Center on Budget and Policy Priorities in Washington, D.C. That money could pay for schools, roads and other needs, critics argue.

Giving a break to seniors based on their age rather than their income or financial status dates from a time when people had shorter lives and fewer investments. But the financial situation of seniors has improved overall, leaving some experts to question whether the tax breaks make sense.

“I think part of it is because there is sort of an image of seniors living on fixed incomes struggling to get by,” said Elizabeth McNichol, who wrote the study. “I think that’s stuck in peoples’ heads. The reality is the senior poverty rate is less than for other people and certainly less than for younger people and children.”

In 1970, about a quarter of the over-65 population had below-poverty income, the report pointed out, citing the U.S. Census Bureau’s official poverty measure. Since then, retirement income, including Social Security, has expanded. Today, only 10% of those over 65 are poor, according to the same measure.

By comparison, the rate of children under 18 living in poverty is 16%, according to the latest U.S. census figures.

But, the report noted, senior poverty is higher within minority groups and among the very old — leading to greater disparities in wealth among senior citizens. “As a result, many longstanding state tax preferences for seniors now benefit taxpayers with much better ability to pay taxes than lower-income households,” the report said.

The state income tax liability of seniors varies. Seniors in Georgia paid just 42% of what they would have paid as non-seniors, compared with 90% in Rhode Island, according to a 2016 study in Public Finance Review. However, state lawmakers have little incentive to stop handing tax advantages to seniors.

Older folks vote more, and they have powerful lobbyists like the AARP to look after their interests. In fact, a half dozen states — including West Virginia, Pennsylvania, New York and Virginia — already are gearing up with new or carryover senior tax break legislation for the coming legislative sessions.

Those would be in addition to 28 states and the District of Columbia, which exempt Social Security income from state income tax. Another 26 states exempt private pension income from taxes, in full or in part. And all but six states give additional age-based benefits such as personal income tax exemptions, higher standard deductions or extra tax credits.