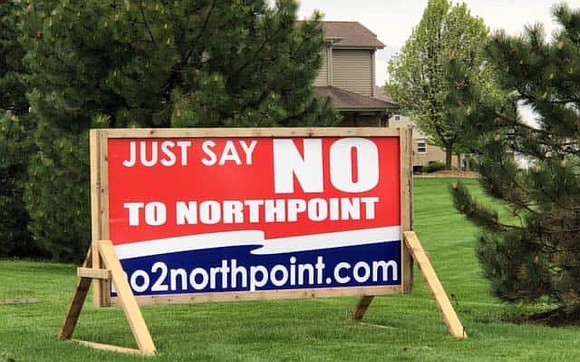 Residents impacted by the growing, foreign-owned NorthPoint Development project are demanding straight talk and transparency after a shocking display of anger and yelling by Manhattan Mayor Jamie Doyle and Trustee Erin McDonough toward their constituents at the Manhattan Village Board meeting January 21.

In response, activists from the Just Say No to NorthPoint (N2NP) group, along with community liaison Erin Gallagher are hosting a public town hall meeting for residents in Manhattan, Elwood, Joliet, Cherry Hill, New Lenox, Peotone and surrounding areas.

It will be held February 10th at Wilson Creek Elementary School, 25440 S. Gougar Road, Manhattan. Doors open at 6 pm for anyone who is unable to stay for the presentation, which begins at 7 pm. Organizers from N2NP will begin the meeting with background on the project and the current status.

"Words like 'it's a done deal,' and 'it's coming anyway' are mere scare tactics NorthPoint are used to pit communities against each other to force council members to vote in their favor," said N2NP founder Delilah LeGrett. "Since most of the land in the warehousing footprint has not actually sold, but remains in contract on the condition of rezoning is proof positive that even NorthPoint doesn't believe it's a 'done deal.'"

NorthPoint Development has asked the City of Joliet to commit to annexation and zoning as early as March 17 without providing any detailed plans or plat. If approved, this would obligate Joliet to blindly approve whatever NorthPoint decides to do.

"This comes as no surprise to those of us familiar with NorthPoint's fan dance," said Gallagher. "NorthPoint teases with only partial information, like we saw in Elwood, and they saw in Kansas."

The town hall meeting will be child friendly, with coloring activities available.