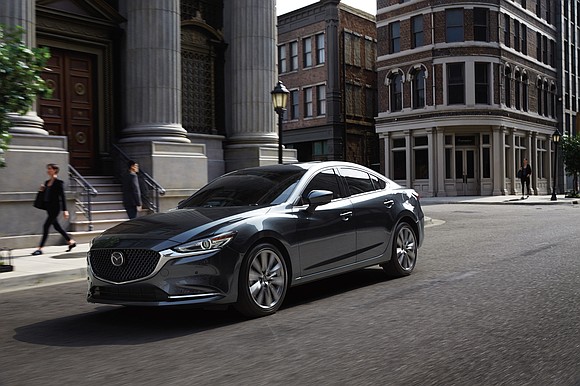 The 2020 Mazda6 midsize sedan is the automakers flagship.

This car was truly a premium sedan. The interior was swathed in leather, the dash had soft touch points. The cockpit was spacious, and the car had a sophisticated feel.

However, we thought the heated steering wheel could have been a little thicker. That can make all the difference in the driving experience.

This Mazda6 Signature was powered by a turbocharged 2.0-liter four-cylinder engine that made 227 horsepower and 310 pound-feet of torque. It was mated to a six-speed automatic transmission with paddle shifters. It was a front-wheel drive sedan with G-Vectoring control.

We didn’t bother with the paddle shifters, but we thought this engine moved the midsize sedan smartly. We had to keep our eye on the speedometer. The Mazda6 approached 80 mph effortlessly.

There was one feature of the car we thought impressive. It used GPS to flash the speed limit in the head up display. But it also marked the limit on the speedometer. What’s more, when we exceeded the limit a thin red line followed the needle and we could really see how much over the speed limit we were. This feature kept us below 80 mph and ultimate slowed us back down to the speed limit.

Inside, the 2020 Mazda6 was sleek and comfortable. There was soft touch leather throughout. Even the door panels front and back were soft and pleasant to the touch. There was a floating infotainment screen atop the dash. And there wasn’t a center stack to speak of. Most of the controls could be operated from the rotary mouse on center console that controlled the screen.

Instruments in front of the driver were analogue for the odometer and digital for the speedometer. The temperature and fuel gauges were housed together, and they were analogue.

The front seats were heated and cooled. They were comfortable and the driver’s seat had a power lumbar support. There was a heated steering wheel as well and a moonroof.

There were power folding side view mirrors, push button lock and unlock as well as pushbutton start and stop.

We found the back seats comfortable. Sometimes there is a falloff in quality when you in the rear seat of a car. Not so with the 2020 Mazda6. Those seats were perforated, and they were heated.

There was plenty of headroom. Leg room was ample and there was plenty of hip room. If not for the tunnel, three people could sit in the back seats comfortably. There were also two USB jacks to go with the two that were up front in the center console, along with a 12V plug.

There was a huge trunk, about 14 cu. ft. You could flip the back seats forward by pulling a couple of switches located in the cargo area.

It had LED lights all round. The headlights were also adaptive and self-leveling. Of course, there was a navigation system, satellite radio, voice controls, Bluetooth, and a rearview camera. There was also 360-degree camera with overview as well.