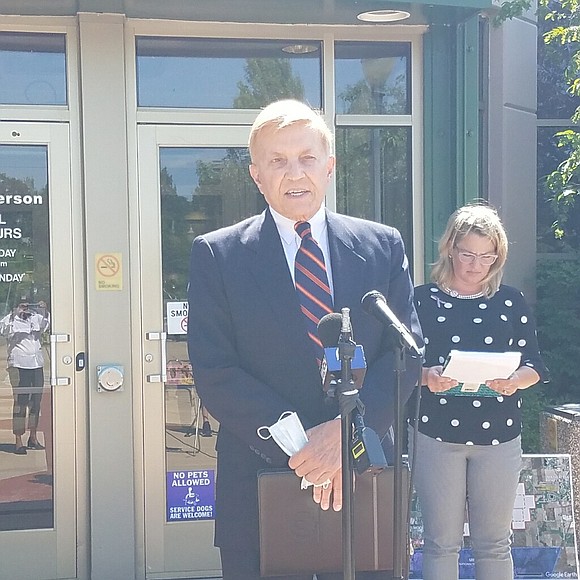 Opposition to the NorthPoint Development is heating up once again as Chicago civil rights attorneys Bob Fioretti and Mark Roth have joined forces with a new organization called “Stop NorthPoint LLC.” The group announced their recent initiative at a press conference Tuesday morning outside Joliet’s City Hall.

Fioretti said the NorthPoint development is “clearly governmental overreach.” The numbers of people opposed to the project, he added, are overwhelming. “It’s big money forcing the little guy out no matter how we look at it,” he said.

“It is bad economic development. It is bad for business. It does not bring good transportation. It doesn’t bring good jobs here to the County of Will.”

Fioretti has been working pro-bono for the Stop NorthPoint LLC, however a fundraising effort is now underway to help defray some of the legal fees associated with fighting the City of Joliet on the project, according to Erin Gallagher, spokesperson for the organization.

Fiortetti vowed to work with others opposed to the NorthPoint development and said he would work with other attorneys involved to develop a legal strategy that will encompass all groups against NorthPoint.

“I think when we all work together we will be able to stop this project,” Fioretti said.

Members of the LLC released a statement on Monday that said their sole purpose is to take legal action against the city to “prevent the certain widespread devastation that NorthPoint Development trucking warehouses would rage upon the communities.”

“The City of Joliet needs to be held accountable for this warehousing project that negatively impacts the future of not only Joliet but communities throughout Will County,” Fioretti said.

The owners of NorthPoint Development want Joliet to annex 1,260 acres a half-mile south of Breen Road and east of Chicago Road to develop a business park. The project is still a long way off with several more steps requiring approval by the City Council before the development actually gets underway.

The next step for NorthPoint is to get final annexation, either in part or in whole, from the Joliet City Council. The land is currently in unincorporated Jackson Township.

Joliet Mayor Bob O’Dekirk has defended the NorthPoint project and said it is “part of the evolution happening throughout that region - process which started 20 years ago.” He added that it would create thousands of new jobs and pour hundreds of millions of dollars into the local economy.

In late April, the Joliet City Council took the first step toward bringing the controversial business park proposal to fruition, despite some community groups vehemently opposing it. Hundreds of people spoke out against the development at call-in public hearings at the height of the Covid pandemic.

The City Council voted 6-3 in favor of the pre-annexation agreement for the Development after a public hearing that lasted four days and included comments or e-mails from nearly 300 residents.

Meanwhile, members of Just Say No To NorthPoint, Warehouse Workers for Justice and other groups opposing the development have vowed to continue to get that vote nullified on the basis that the meeting violated the Open Meetings Act.

At this point, however, any pending litigation has stalled.

The group, Stop NorthPoint LLC, is an all-volunteer, organization including many with Joliet and Manhattan ties. Founding members are Manhattan resident Ron Adamski, and Manhattan Township resident John Kieken.

“Mr. Fioretti and his team have been generously working with us pro-bono since before Easter to help ascertain and assist with legal council,” Adamski said. “It is now time for us, residents who oppose NorthPoint, to put our money where our mouth is and start raising funds for a proper legal attack.”