Brass sworn in for Will County Board District 8 seat

Joliet resident to fill remainder of Winfrey's County Board term 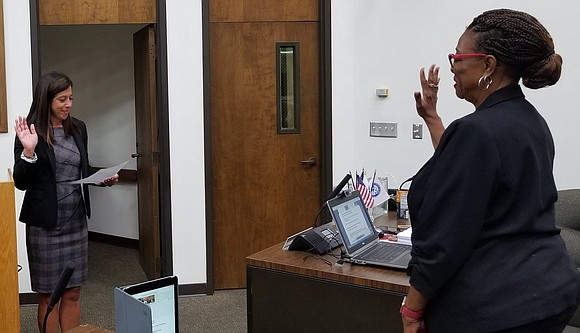 Will County Clerk Lauren Staley Ferry on Thursday swore in Edna Brass (right) as Will County Board Member for District 8 in Joliet. She will fill a vacancy left when former County Board Speaker Denise Winfrey was selected for the County Executive position.

The Will County Board has approved the appointment of Edna Brass to the board's vacant position in District 8. The appointment was made at the July board meeting and comes after the previous representative of District 8, Denise Winfrey of Joliet, vacated that seat to become County Executive following the passing of incumbent Lawrence Walsh Sr.

"I look forward to working with Ms. Brass on all of the important issues in Will County and in District 8," said Board Speaker Mimi Cowan (D-Naperville). "There are many pressing issues facing the residents in Will County and it is vital that we have a full board to serve all of our constituents."

Brass grew up in Joliet and attended Joliet Central High School. She recently retired from Joliet Township High School as the District Director of Special Services. Brass attended Western Illinois University, where she received a B.S. and M.A. in Speech Pathology. She then attended Governors State University and Illinois State University for post graduate work in Educational Administration. She also studied at Eastern Illinois University where she obtained additional state certifications. Brass is also involved in the community through organizations like Easterseals and National Hook-Up of Black Women.

"Executive Winfrey served District 8 very well and I look forward to continuing to serve our constituents at the same level," said Brass. "I am honored to be selected to fill this position. There is much to be done in Will County, especially during these challenging times, and I am ready to get to work."

Brass joins Herb Brooks (D-Joliet) in representing District 8, which includes Joliet Township and part of Troy Township. The next election for District 8 seats will be held in November 2020.

"I want to welcome Edna to the board and I look forward to working with her," said Republican Minority Leader Mike Fricilone (R-Homer Glen).

Brass was nominated by the Will County Democratic Central Committee and appointed by the County Executive to serve the remainder of Winfrey's term.

Edna M. Brass has been appointed to fill a vacant Will County Board seat.

Brass, of Joliet, was appointed to fill the vacant Will County Board seat in District 8 until after the November election when County board member and Speaker Denise Winfrey returns to the position. Winfrey is currently serving as interim Will County Executive following the death of longtime County Executive Larry Walsh. Winfrey was appointed to the interim post in June. She is filling out the remainder of Walsh's term.

Walsh died June 3 after a lengthy battle with prostate cancer.

Will County Clerk Lauren Staley Ferry administered the oath of office for Brass during Thursday’s Will County Board Meeting.