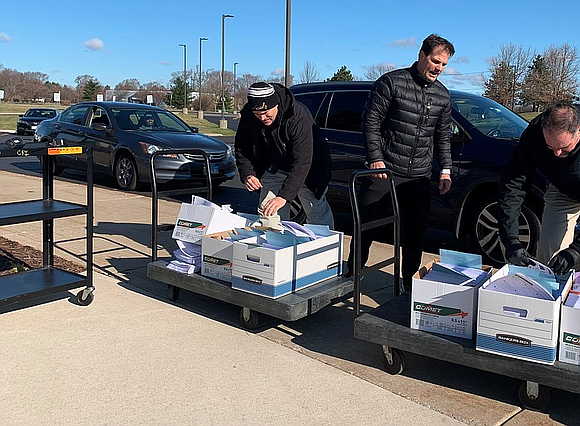 District 202 Superintendent Dr. Lane Abrell, Dave Stephens, Plainfield High School-Central Campus principal, and Dr. Glenn Wood, Assistant Superintendent of Curriculum and Instruction are seen back in March handing out Remote Learning packets to families at the Administration Center. The district's board on Monday rejected a plan for continued remote learning by a 3-3 vote.

A proposal for Plainfield District 202 students to start the 2020-21 school year with remote learning failed by a 3-3 vote at Monday’s regular Board of Education meeting.

The proposed “Return ‘20” plan would have allowed students to return to in-person learning for the second quarter this fall if COVID-19 conditions improved.

The Board directed administration to bring back another proposal. The Board’s next regular meeting is Aug. 17, but Supt. of Schools Dr. Lane Abrell said a special meeting would likely be needed. School is scheduled to start in late August.

A special meeting date was not set.

Board member Heather Drake, Vice President Rod Westfall and President Kevin Kirberg supported the proposal. Board Secretary Dave Koch, and Board members Bob Smith and Mike Robey voted against it. Board member Joette Doyle was absent because of recent health issues.

The Board first heard the proposal on July 15 at a special Committee of the Whole meeting. Community members emailed more than 1,800 comments both for and against the proposed plan.

District officials considered many factors in creating the “Return ‘20” proposal including more than 33,300 parent, student and staff comments collected through several surveys this spring and summer; input from several parent, staff and student committees; a long list of challenges ranging from transportation, safety, supplies, staffing and liability.

As well, district officials stressed that they were confident that changes made to District 202’s remote learning plan to bolster resources, supports and participation will significantly strengthen the district’s program.

Monday, Abrell said he was willing to review pandemic conditions after only four weeks so that students could possible return sooner He also said he would consider letting the most at-risk students return sooner to provide them more direct teacher contact and support.

Drake, acknowledging parents’ concerns, asked that the proposal be amended to require teachers to interact online with students every day rather than once or twice a week as first proposed. She also suggested requiring teachers to teach online from their classrooms rather than from home.

She and Westfall both emphasized the need to protect students’ and staff’s health and safety.

However, Robey raised concerns about the long-term social and emotional impact of continued separation of students from their teachers.