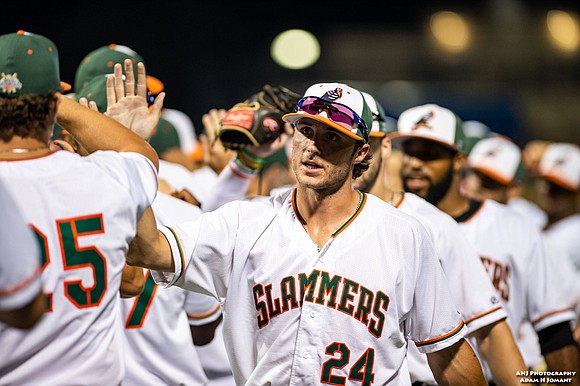 The highly anticipated rematch between the Joliet Slammers and Tully Monsters was the Saturday night showcase at DuPage Medical Group Field. The two teams faced each other for the first time since Opening night, when the Tully Monsters won 7-5. Similar to that game, this one didn’t disappoint those who attended.

It didn’t take long for the Slammers to get on the board, as they jumped on Tyler Jones in the top of the 1st inning. The Slammers had bases loaded with no one out as the red-hot Noah Vaughan stepped up to the plate. With two strikes, Vaughan hit a single into right field to give the Slammers the early 2-0 lead.

The Tully Monsters awoke in the bottom of the 2nd by scoring their first run of the game. Nick Meyer had a leadoff single, and then stole both second and third base. Riley Pittman took care of the rest and hit a ground ball to the right side to cut the Slammers’ lead in half.

The Slammers responded promptly with a big inning of their own. Andrew Shaps led off the 3rd inning with a double down the left field line. Two pitches later, Zach Kirtley smacked a double to center field to score a run. Slammers were able to scratch across another run courtesy of a Jacob Crum ground ball to make it 4-1 Slammers.

In the next inning, the Slammers continued their dominance at the plate showing no sign of slowing down. Korry Howell hit his second single of the game, which set up Andrew Shaps to hit him in on a triple to center. Kirtley followed with a sacrifice fly, which put the Slammers ahead 6-1.

The Tully Monsters were able to scratch across a run in the bottom of the 4th. Alex Mckenna doubled to start off the inning, and made his way around the bases on consecutive ground balls. Riley Pittman was the one to drive him in, which was his second RBI on the day. Entering the 5th innings, the Tully Monsters trailed 6-2.

Korry Howell put some distance between the two teams with a RBI triple in the top of the 5th inning. Harrison Moore came in to pinch-hit and reached on an error, then displayed the speed rounding the bases to beat the throw at home to score.

The Slammers put together a three hit inning in the 6th, along with another run. Singles from Kirtley and Jordan Procyshen put runners on with no outs. Two Batters later, Zac Taylor hit a single on his pinch hit plate appearance to make it 8-2 Slammers.

When it seemed like the Slammers put the game away, Luke Mangieri of the Tully Monsters had something else planned. With bases loaded and one out, Mangieri hit a grand slam to deep right center field. The game was now 8-6, and the Tully Monsters had bases loaded again later on. Cameron Auferheide of the Slammers came into pitch with bases loaded and one out. Harrison Moore made a sliding catch in right field to save a run from scoring. Auferheide got Alex McKenna to ground into a fielder’s choice to limit the damage.

After that, the bats were quiet on both sides as the final score of the game stayed 8-6 Slammers. With that win, the Slammers took first place in the City of Champions Cup. The first game of tomorrow’s double header is between the Slammers and Herds herd at 12:05. The evening game will be between the Tully Monsters and Deep Dish.

Tonight’s Merchants and Manufacturer’s Bank Player of the Game is: Slammer’s OF Korry Howell - 3/5, RBI, 2 R.