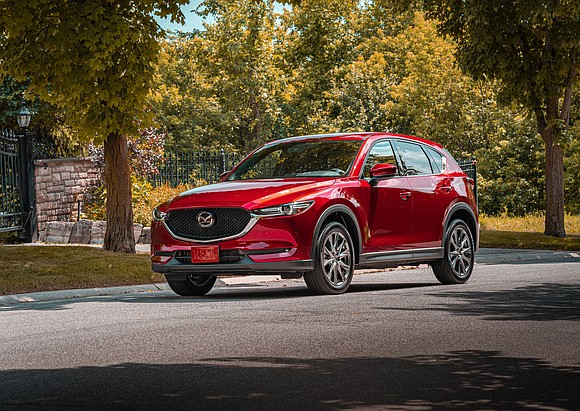 The 2020 Mazda CX-5 does not have the long curvy front of most of its brand brethren. That no doubt is because it is a midsize crossover. Still it maintains the smooth lines of the brand’s Kodo design.

Our test vehicle was powered by a 2.5-liter turbocharged four-cylinder engine. It made 227 horsepower and 310 pound-feet of torque at 2,000 rpm. It was mated to a six-speed automatic transmission with sport mode. There were also paddle shifter.

This engine provided more than enough oomph. On city streets it was quiet, we could barely hear it. On the expressways, it accelerated effortlessly and could cruise without strain, plus it got up to speed without exertion.

The Mazda CX-5 had an independent front and rear suspension with front and rear stabilizer bars. It had electronic power steering assist and G-vectoring control. It improved steering response as the driver straightened the wheel, by adding a bit of braking to the outside front wheel. That helped prevent accidentally over-driving the car in high-speed and emergency maneuvers. At least that’s what Mazda said.

The CX-5 was an easy drive and ride. The crossover was not hard to handle, it went where we steered without any kind of friction or resistance. Yes, we were traversing urban streets, but the ride was smooth, quiet, and uninterrupted by undo bumps, cracks, or depressions in the pavement.

You could say that the interior of our test vehicle was subdued refinement. It had caturra brown leather trimmed seats as well as brown side panels. The second color was dark gray that matched the exterior machine Gran Metallic. And lest we forget, our test vehicle had all-wheel drive.

The interior had stitching and chrome accents. The leather-wrapped steering wheel featured unique stitching, while ambient interior LED lighting, a black headliner and a frameless rearview mirror all lent to creating a refined interior atmosphere.

There were analogue and digital instrument readouts. The latter applied to the speedometer in the middle of the instrument layout. We were a bit surprised because the CX-5 had a touch infotainment screen, something Mazda tries to avoid.

There was a black piano template around the gearshift and the dial mouse that controlled the vehicle’s functions. There was a smaller dial for the volume on the audio system.

Of course, there was Apple CarPlay and Android Auto. A 360° view monitor with front and rear parking sensors was nice. A head up display was part of the package as was a configurable TFT gauge display. And there was a seatbelt reminder indicator for the driver and all passengers.

This Mazda CX-5 had voice controls, a navigation system, satellite radio, Bluetooth, adaptive headlights, USB, and auxiliary jacks as well as 12V plugs. And it had off road traction assist.