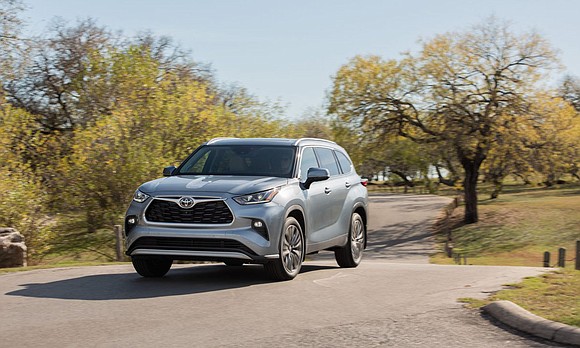 We had a three-row 2020 Toyota Highlander. So, we started by climbing into the third row.

There was surprisingly plenty of headroom, leg room was sufficient but totally dependent on moving the second-row seat forward and straightening the seat back, if necessary. And the floor level was higher, thus our knees were higher than our hip point. Plus, the third-row seats bordered on being outright hard.

One drawback was getting out when there is no one to activate second row seat forward motion. We did it but it was not easy. While back there we noticed that this Toyota Highlander had manual sunscreens for the second-row windows.

The second-row seats were much better. They were captain’s chairs and they were heated. There were climate controls at the back of the center console. The Highlander had two USB charging jacks, and a 120V plug with ground.

Those captain’s chairs were soft and perforated. Legroom was abundant and headroom was too, considering they were right at the end of the panoramic roof. We could get a much better look at the beige and brown motif of the interior.

We got in the driver’s seat and it felt like the command center. Early on we noticed that there were two more USB charging stations and a 12V plug under the control panel.

In front the center console flowed into the armrest. That console had the switches for the ride modes: sport, eco and normal. There was also a dial that could put the Highlander in gear for mud & sand or rock & dirt. And there too was a button that shifted it into the right configuration for plain old snow.

That took us back to the armrest, which was pretty slick. It slid open much like a roll-top desk. The first thing we saw was the pad for wireless charging. It didn’t lift out, but it could be pulled up into a 90-degree angle and we were looking down at a shelf. That could be lifted out and it revealed a deep storage area.

We noticed that the driver’s seat was comfortable. It felt like it had been custom made. There was plenty of lower back support, of course they were power, but the front passenger seat didn’t have a power lumbar supporter.

In front of us was an elaborate lay out of instruments. Toyota interior designers opted to give the Highlander analogue instruments. The odometer and speedometer had raised frames and the numerals were real as in they didn’t fade away when we turned the crossover off. One had the temperature gauge inside of it while the other held the fuel gauge.

There was a huge TFT screen between the two. It told us that we averaged 18.8 mpg on one trip. We toggled through and found the tire pressure monitoring, the compass and the satellite radio station that was playing. That was just some of the information it provided.

The lane keep program allowed us to choose lane center, steering assist, sensitivity of the system and sway warning. The new Highlander can tow up to 5,000 lbs.

The seatbelt monitor told us which seat was occupied and was there a seatbelt in use. Just what you need if you’ve got kids in the second or third row or both.

The touch infotainment screen was 12.3 inches wide. It could display information in three sections, and they could be changed much like a smartphone. Press an arrow and other information would slide in.

It was housed in what reminded us of a hand-held mirror with a stem turned on its side. The screen was in the top half, the bottom half held the climate controls and the neatly packed controls for the heated and cooled seats were there, too. And there was the thinnest line of black buttons in between for home, menu, audio, and map. It was nicely done.

These were just some of the amenities. You can’t go anywhere without an engine and the 2020 Highlander had one of Toyota’s most reliable power plants. It was the 3.5-liter V6. In this configuration it made 295 horsepower and 263 pound-feet of torque and it was mated to an eight-speed automatic transmission. And thank somebody that it did not have paddle shifters.

The combination got 20 mpg in the city, 27 mpg on the highway and 23 mpg combined. The engine was quiet, shifts was buttery smooth, and the ride was tame. The 2020 Highlander had an independent front suspension and a multilink rear suspension. The ride was both smooth and quiet.

There are three all-wheel drive systems available on the Highlander. Ours had what Toyota is branding dynamic torque vectoring. There was also driveline disconnect on our top of the line Platinum model. It could distribute torque between left and right wheels and send 50 percent of the push to the rear wheels.

It had Toyota Safety Sense 2.0 as standard equipment. There was a pre-collision system with pedestrian detection, full-speed range dynamic radar cruise control, lane departure alert with steering assist, automatic high beam, lane tracing assist and road sign assist. Our model also had a heated steering wheel, but we think it was included on the Platinum trim and not a stand-alone option.

And the equipment went on and on. Our test vehicle also had voice controls, satellite radio, Bluetooth for hands free phone calls, internet streaming, a navigation system and a bird’s eye view camera.