More than 700 nurses could strike on July 4 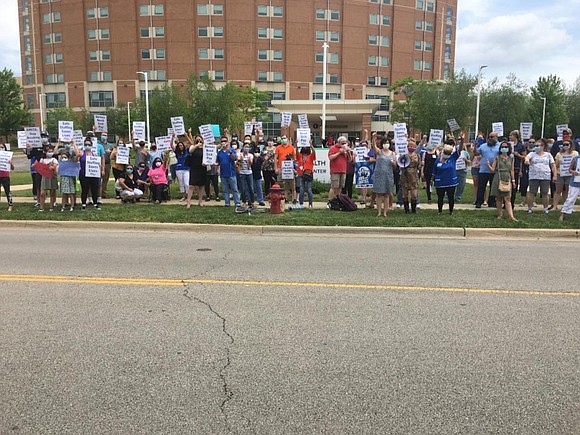 Nurses represented by the Illinois Nurses Association who work at AMITA St. Joseph’s Medical Center, in Joliet, filed a 10-day notice that could see the nurses strike as early as July 4th. In May, the nurses voted 558 to 53 to authorize an unfair labor practice strike. INA repre-sents more than 720 nurses who work at the hospital and both sides have been in negotiations on a new contract since early Spring. The current contract expired May 9th and negotiations have been supervised by a federal mediator.

The two sides are still far apart. According to Pat Meade, one of the nurse negotiators, the most recent contract proposal from AMITA management is in some ways worse than its first offer.

“AMITA proposed a three-year wage freeze whereas INA has offered wage increases more closely tied to cost of living increases, they are unwilling to act on nurses' recommendations to improve staffing and patient care which is a top priority for our members,” she said. ”We pre-sented AMITA’s offer to our members and 89 percent rejected it.”

Negotiations between the two parties have not gone smoothly. INA has filed four unfair labor practice complaints against the hospital for intimidation and coercion and for refusing to bargain in good faith.

The most recent offer from AMITA called for the following:

$500 FT/$250 PT/ $200 IHRs, if AMITA decides to allow other employees to get their merit in-crease then RNs also get merit increases.

*Staffing: Establish a recruitment committee, Weekend Program as union proposed (several con-tracts earlier), but no to ratios or improved staffing plans, no to free charge nurse on nights, criti-cal incentive program for all extra shifts during critical times paid $10 per hour unit, $12.50 per hour for nurses who float.

In contrast, the INA has proposed the following contract:

Meade said negotiations took a downward turn on June 12, when AMITA proposed elimination of INA’s wage scale and withdrew its proposed wage increases that were on the table.

COVID-19 hangs over the negotiations as nurses want to retain the Extended Illness Bank bene-fit, which allows nurses to be paid for any illness or injury more than four days, a crucial period of time for frontline health care workers at heightened risk of COVID-19 infections. The benefit allows a nurse up to 12 weeks of sick pay. However, according to Meade, the hospital wants to eliminate the benefit and replace it with an insurance plan that would only provide half the pay nurses currently earn.

AMITA was clear that their proposed wage freeze and elimination of extended illness benefits was not due to inability to pay, but blamed the COVID pandemic for their decision, she added.

According to union officials, AMITA’s parent company Ascension received more than $200 mil-lion from the federal government as part of the COVID-19 pandemic relief effort.

Meade said the two sides are scheduled to meet again with management on June 30th and July 8th.