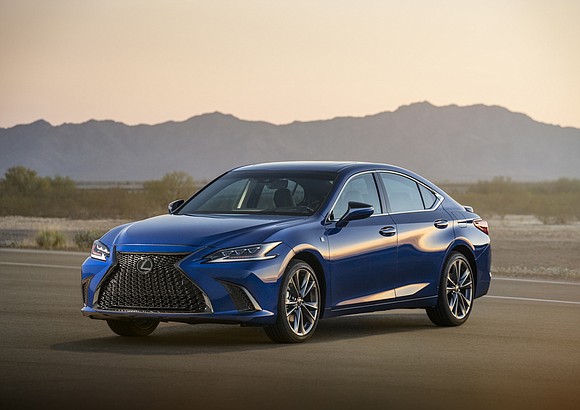 Lexus designers have taken a sedate sedan, the ES 350, and turned it on its head.

The 2020 Lexus ES 350 F Sport was snazzy, sporty and fun to drive. The new generation of the ES, the seventh, was longer, lower, and wider. The wheels were pushed to the corners, and the wheelbase was longer, and the track was wider. What that means is a sedan that performed more like a sports coupe than a front-wheel drive four-door car aimed at an older buyer, which was the original task of the ES.

The ES 350 F Sport of course had Lexus’ signature spindle grille. It had a mesh pattern comprised of interlocking “L” s with jet black finish and dark trim. The headlights were slim, and they were a triple beam setup, with L shaped marker lights.

The silhouette started with a low hood line. So too was the roofline. The A-pillar flowed nicely into the C-pillar. The shoulder line was interrupted and started from the top of the front wheel arch and ended at the corner of the trunk.

The rear was edgy; LED taillights wrapped around the quarter panels. They carried the “L” motif that gave each cluster a continuous styling line from any angle. There was a low valance that highlighted the wide stance that was accentuated by the chrome exhaust tips. A distinctive trunk spoiler added a good bit of sportiness.

One of the worst things automakers can do is design a car that looks fast but is not. That was not the case with the 2020 Lexus ES 350 F Sport. It was powered by a 3.5-liter V6 that made 302 horsepower and 267 pound-feet of torque.

Mated to an eight-speed automatic transmission, this ES 350 had an EPA fuel rating of 22 mpg in the city, 31 mpg on the highway and 25 mpg combined.

Five drive modes – sport +, sport, normal, custom and eco – provided plenty of exhilaration and a tranquil ride depending on the setting. The changed suspension design used MacPherson struts in front and a trailing arm, multilink setup in back with stabilizer bars at each end.

During our week-long test drive, we hardly felt a ripple in the pavement or a bump in the road.

Inside we were greeted by a red and black interior with red stitching. It is part of the F Sport trim package and Lexus called it Circuit Red for the seats and the door panels.